California Sikh Family Murder: Hundreds join the family in a show of solidarity at the funeral service of the deceased

Saturday’s memorial when the Funeral service was taken out at Allen Mortuary was for the family only, although the community members were welcomed to show their support Author : Tushar Singh 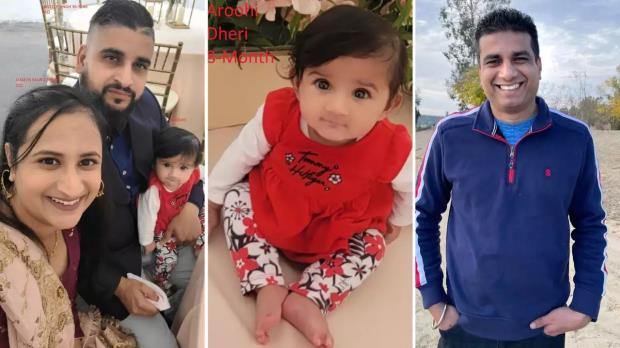 A couple of weeks after an Indian-Origin Sikh family of four including a baby girl were killed after being kidnapped by a man in the American state of California, hundreds of people thronged to attend their funeral services.

Four members of the family including, 8-month-old Aroohi Dheri, her mother Jasleen Kaur, her father Jasdeep Singh, and her uncle Amandeep Singh were abducted at a gunpoint on the 3rd of October by a man identified as Jesus Salgado, who was identified as an employee of the former’s trucking company.

Two days later after the news of the family’s kidnapping surfaced the man killed all four of them on October 5th. The funeral took place in Turlock city of California a couple of days back. The Sikh family, originally from Harsi Pind in Hoshiarpur, Punjab, was kidnapped by one of their employee over certain business-related matter

A person named Mani Grewal a Stanislaus County Supervisor while turned up at the occasion said, “We are just here to show the family there now, they're not in this alone.”

“Our community is way better than the acts of these two individuals that have done heinous crimes,” An American TV quoted Grewal as saying. Friends and relatives of the victims said it will take a long time for the family to get over this horror.

“I don't know how the family is going to come out of this tragedy. It's going to be very difficult. We are here to support the family,” said Sanjeev Tewari, a friend of the family.

Pakistan may be one of the most dangerous nations in the world: Biden

Saturday’s memorial when the Funeral service was taken out at Allen Mortuary was for the family only, although the community members were welcomed to show their support for the family members of the victim. The last rites were done with full Sikh tradition.

While on the other hand, the murderer entered a not-guilty plea in court on Thursday last week. He will be presented before the trial court next month said, Alberto killer’s brother who is charged as an accessory.

Salgado is charged with four counts of first-degree murder with special circumstances for the death of the Indian-origin family. The criminal is also charged with arson and unlawful possession of a firearm by a prohibited person.

Salgado, a 48-year-old man is held on $450,000 bail as per the county record. No comments were received from the end of his attorney. The status hearing is set for December 15th in the court.