The artist chose to star in the opening ceremony of the big event between Liverpool and Real Madrid and also put a Latin touch with her songs that were sung in the same way as the goals that would be scored later. 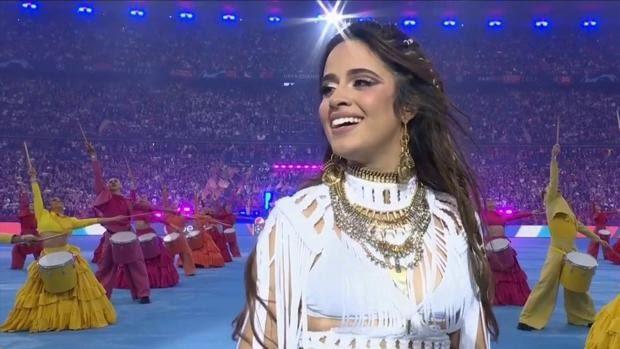 Camila Cabello UCL Final: Camila Cabello lit up the Champions League final in the run-up to the match. The artist chose to star in the opening ceremony of the big event between Liverpool and Real Madrid and also put a Latin touch with her songs that were sung in the same way as the goals that would be scored later.
The Cuban-American singer sang several songs from her repertoire that have made her famous, songs with which all of Saint-Dennis vibrated. The Cuban -born began her show to the rhythm of "Señorita" wearing a two-piece suit. She then continued with ' Bam Bam 'and ended with 'Don't Go Yet' with elaborate choreography by her cast and applauded by the audience. Due to incidents with Liverpool fans outside the stadium that delayed the Champions League final, the interpreter was also late for her presentation.
Still, the expected duration of her performance was not reduced.
The 25-year-old international star has previously said that watching soccer with her Mexican relatives helped her hone her goal celebration. "My father is Mexican and I am Latin, so soccer is an important part of our culture and we support Mexico whenever it plays," added the singer, who said she had followed the television series " Club de Cuervos " about this sport. Her mother is Cuban and her father is Mexican.
This Saturday's show, before the start of the final between Real Madrid and Liverpool, was designed acoustically and in colour to "get people excited" and provide "a lot of energy". The singer-songwriter did not want to get wet about which team will get her support and assured that she will encourage them both: "They have worked very hard. I encourage them both," she commented, although she does hope that it will be "even": "I do not like when there is an advantage of a team from the beginning".
Also Read: IPL Special :It's ruthless business for me on the field; Nehra gets the best out of me: Hardik Pandya
The Champions League final is not only a football spectacle. Emulating the Super Bowl, the Champions League also celebrates a musical show that is broadcast in more than 200 countries. Each year, the Opening Ceremony features some of the world's biggest music artists. Until 2016, UEFA regularly brought a classical music singer to perform the competition's anthem.
Interpretations of 'Nessum Dorma' with Andrea Bocelli have been seen in the past, as well as performances by artists such as Oceana, David Guetta, Zara Larsson, Robbie Williams, Imagine Dragons or Dua Lipa have appeared in recent years in opening events of competitions of the continental body. As a novelty, fans have been able to watch Camila Cabello's show, in addition to the local television that broadcasts the match in each country, on the official UEFA channels on TikTok and YouTube.