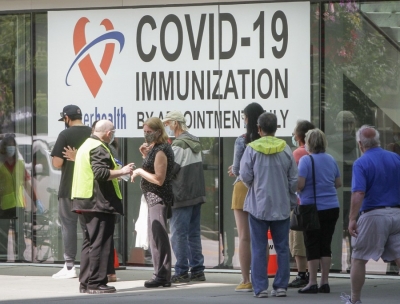 Alberta, a province with a population of 4.4 million in the country, reported 1,254 new Covid-19 cases and 13 deaths, Xinhua news agency reported, citing CTV.

There are 1,094 Albertans in hospital receiving treatment for Covid-19 as the province gears up for the Thanksgiving long weekend. The province now has 18,411 active cases. It identified 248 patients in intensive care units (ICU), with 87 percent being unvaccinated.

Quebec, a populous province in Canada, reported Thursday that 624 more people in Quebec had tested positive for Covid-19, bringing the overall number of infections to 413,903.

Of the new cases, 426 were unvaccinated, 21 received one dose more than two weeks ago, and 177 were double-vaxxed more than seven days ago.

British Columbia confirmed 624 new cases Thursday afternoon. Four more people died of Covid-19 in the 24-hour period in the province, which raised the death toll to 1,996. The total known cases since the start of the pandemic were 191,748, and the total active cases were 5,929.

Ontario, the most populous province with a population of 1.4 million in Canada, reported 587 new cases of Covid-19 on Thursday as the province has released guidelines on how residents can celebrate Thanksgiving this holiday weekend.

The new infections marked an increase from the 476 cases logged Wednesday and 429 Tuesday.

Six additional deaths were reported on Thursday, bringing the province's total death tally due to the pandemic to 9,776.

The province also identified an additional 38 cases of the Delta variant in lab-confirmed Covid-19 tests, bringing the total to 18,979.