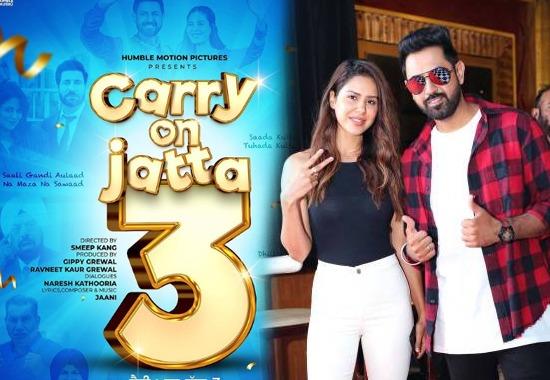 The long wait is finally over and the third installment of the famous franchise Carry On Jatta directed by Smeep Kang is all set hit the theatres on 29th June 2023. Apart from Sonam Bajwa and Gippy Grewal, the film also stars, Binnu Dhillon, Karamjit Anmol, B.N. Sharma, Sonam Bajwa, young Shinda Grewal.

The poster shared by Gippy Grewal and Sonam Bajwa of Carry On Jatta 3 shows all the major and most memorable characters of the famous franchise. All the characters are masked by a blue-colored filter. In the center of the poster name of the film is written along with famous dialogues. The dialogues include “Saali Gandi Aulaad Na Maza Na Sawaad”, “Saada Kutta Kutta Tuada Kutta Tommy”, “Dhillon Ne Kala Coat Aviyen Ni Paya”, etc.

Talking about Carry On Jatta 3, the audience will witness a cute love story between Gippy Grewal & Sonam Bajwa. Apart from this, Binu Dhillon and Kavita Kaushik will be seen as husband and wife while Shinda Grewal will play the role of their son. Gurpreet Ghuggi, Jaswinder Bhalla, Naresh Kathuria will also be seen in the film.

Sharing the poster of the film Gippy Grewal wrote, “Get ready for triple fun. Carry on Jatta 3 in cinemas on 29th June 2023.”