Fans were eagerly waiting since then to get a glimpse of the actress's daughter. Well, your wait is over, because Priyanka has shared her daughter's picture. 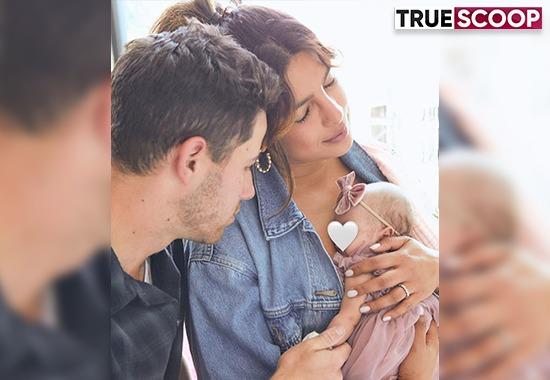 Priyanka Chopra Daughter: Priyanka Chopra, who made her mark from Bollywood to Hollywood, recently became a mother and the actress gave this information on social media.
Fans were eagerly waiting since then to get a glimpse of the actress's daughter. Well, your wait is over, because Priyanka has shared her daughter's picture. Priyanka shares daughter's picture Priyanka Chopra shared a picture of her little life late night on the occasion of Mother's Day.
The face of the actress's daughter is not visible in this photo, but for the fans, just a glimpse of the girl is enough. In the photo shared by Priyanka Chopra, husband Nick Jonas is also seen with her.
Priyanka is hugging her baby girl and Nick is lovingly looking at his daughter.

Girl returned home after 100 days
While sharing the photo, Priyanka has shared the feeling of becoming a mother with the fans.
She wrote that on the occasion of Mother's Day, I want to tell you that we have been sitting on a roller coaster ride for the last few months. We know that more people must have experienced this. After more than 100 days in the NICU, our little one is finally home. Every family's journey is unique and requires a certain level of faith and the last few months of our lives have been challenging.

Family was in trouble
Priyanka Chopra further wrote that if we look back, we realize how precious and perfect every moment is. We're so glad our little baby girl is finally home and would like to thank every doctor, nurse and specialist at Ready Children's La Jolla and Cedars Sinai, Los Angeles who were selflessly every step of the way. Our next journey begins now and our baby is really strong. Let's go ahead mm. Mommy and daddy love you very much.
Also Read: “Tough day at work”, says police while catching a leopard, watch video
Baby girl's name
In this post, Priyanka Chopra has called her daughter MM, which can mean Malti Marie.
Recently there was news that Priyanka and Nick's daughter's name is Malti Marie Chopra Jonas and it seems that Priyanka herself has confirmed this. You will be surprised to know that Priyanka Chopra's mother's name is Madhu Malti Chopra.
Priyanka inspired by her mother's name and named her daughter as Malti. Along with this, Priyanka is a Hindu and Nick is a Christian and both of them are clearly visible in the name of the daughter. Being a Christian, PC has added Marie to the daughter's name. Along with this, the actress has also named both of them in her daughter's surname.