The situation deteriorated so much that there was a scuffle between Chandigarh Police and Punjab Congress President Amarinder Singh Raja Warring. 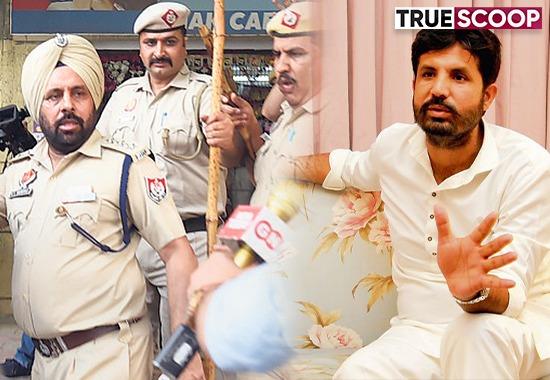 There was a ruckus in the Punjab CM's residence in Chandigarh over the sit-in of the Congressmen. The situation deteriorated so much that there was a scuffle between Chandigarh Police and Punjab Congress President Amarinder Singh Raja Warring.
After this, the police took all the Congressmen into custody. They were taken to the police station by filling on the bus. Congress had come to meet CM Bhagwant Mann. Raja Warring said that a case was registered against former Congress minister Sadhu Singh Dharamsot and Sangat Singh Giljian under political vendetta.
In Punjab, there is a boil in the Congress against the action against two former ministers in the corruption case. In this case, Congress leaders reached outside the CM's residence and started a dharna. The officers took Warring inside to meet the CM, but the CM is yet to meet him. After not meeting the CM for more than an hour, the Congress leaders sat on a dharna inside the CM's residence.
Also Read: Punjab Congress: Raja Warring makes Sidhu-like statement; shows attitude to the high command
It was reported that the officials of CM House had asked Raja Warring to bring 5 representatives, but he left with all the MLAs and former MLAs. Angered by this, Congress leaders have sat on a dharna inside the CM's residence. This has stirred the administration. This would be the first time that the opposition CM sat on a dharna inside the residence.
Bhagwant Mann tweeted
Now CM Bhagwant Mann has answered this. He said, 'I am sad that without taking any time the remaining Congressmen from Punjab came to my house. He came in favour of leaders facing bribery cases. Supporting those who looted Punjab is proof that bribery is in their blood. He was raising slogans that 'Sadde Haq-Athe Rakh' means bribery is also the right of Congress.
The detained Congressmen include Punjab Congress President Amarinder Singh Raja Warring, Leader of Opposition in the Assembly Partap Singh Bajwa, former Deputy CM Sukhjinder Randhawa, former MLA from Jalandhar Sushil Rinku, MLA Bawa Henry, MLA Sukhwinder Kotli, besides many other leaders.
He said that the CM had given the time of 10 am. Despite this, they did not meet. On the contrary, he was lynched while being called inside the CM House. They were searched and mobiles were kept outside. The police gave him an appointment at one o'clock, but the Congressmen did not agree. After which he was taken into custody.