The students have alleged that the university administration and the higher officials of the Punjab police are suppressing the matter, the demonstration has been on since Saturday evening for now Author : Tushar Singh 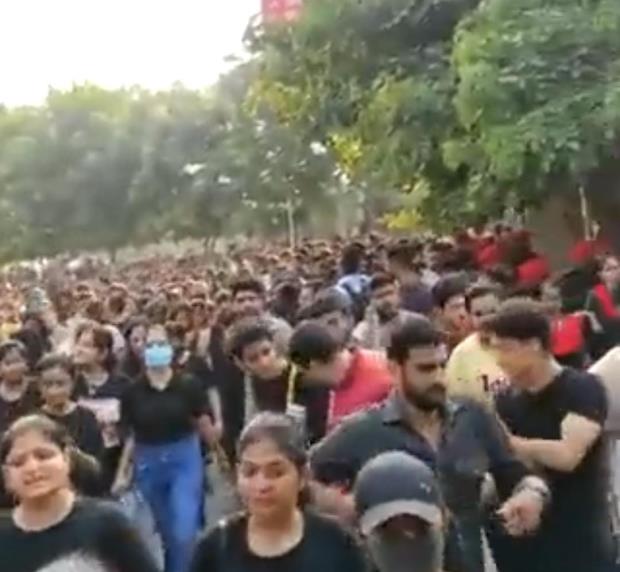 The matter pertaining to the video leak from Chandigarh University has brought hundreds of students back on the roads protesting over the manner in which the case has been taken up.

The students have alleged that the university administration and the higher officials of the Punjab police are suppressing the matter. The demonstration has been on since Saturday evening for now.

Earlier in the day Mohali SSP Vivek Soni and DIG Ropar range Gurpreet Singh Bhullar reached the campus to investigate the matter. Both the officers besides the university management have denied all forms of claims over the student’s death or suicidal attempts.

The statement sparked anger among the agitating students and scaled up their demonstration against the administration and the police.

It was in the evening earlier today the students gathered together and marched around the campus with sloganeering and protesting over the case wearing black clothes.

Students went on to allege that the police denied the claims of the video going viral even before the investigation was completed. The victims against whom police conducted the inquiry confessed to the video being shot by the accused but were suppressed by the police.

The demonstrating students went on to siege the DSW office prompting the university administration of deploying police on the campus.

Looking at the magnitude of escalation in the matter, the university registrar ordered the suspension of class for the next two days, however, has asked the faculties to report routinely to their office on the non-working days. Besides, other units of the university will remain operational.

Girls in the hostel inquired from the girl who made the video. A video showcasing similar interrogation has surfaced. The accused have also confessed to making these videos under the pressure and showed the picture of a boy leveling him as the mastermind in the entire incident

As per the investigation done so far in the case, the Shimla-based man who is said to be the boyfriend of the prime accused has been identified as Sunny.

Contrary to the claims of students, SSP earlier in the day in a joint press conference with DC Mohali said, that based on our investigation we have found the video of only the prime accused which was sent to Sunny.

During the stretch of the media briefing, he denied all forms of claims and allegations about the leak of personal videos of 60 odd girls through the prime accused.

The incident has drawn the attention of several high-profile politicians in the matter including AAP national convener Arvind Kejriwal and Punjab Chief Minister Bhagwant Mann among others.

Both of them have assured strict action in the matter besides guiding police to launch a high-level probe to get consolidative evidence in the matter.