Punjab Police's Ropar range DIG Gurpreet Singh Bhullar and SSP of Mohali Viveksheel Soni said that the student had only sent her video to the boyfriend. Author : Guneet kaur 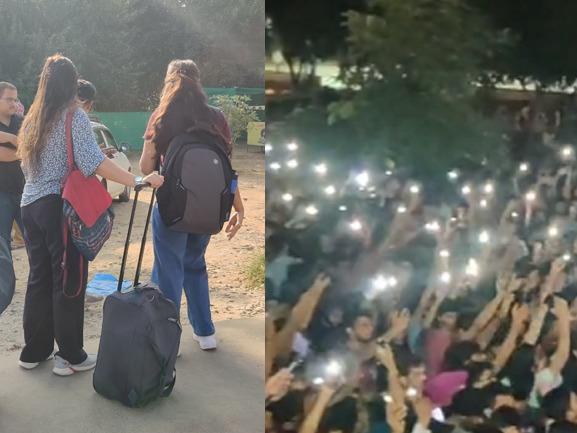 The whole of India woke up on Sunday in a state of shock after massive protests grappled the Chandigarh University based in Mohali. It was alleged that the personal videos of 60 girls have gone viral over social media which angered the students of the university. News from different angles have been doing rounds and many questions have been raised till now but still many things remain unclear. Let’s get the whole matter straight.

The strike that has been going on in the campus of Chandigarh University saw an end at 1:30 pm. The students decided to call off the protest as the DIG Ropar Gurpreet Bhullar and the DC of Mohali Amit Talwar assured them that all their demands will be met. The incident has frightened girls living in the hostel up to an extent that many of them have decided to vacate it. Parents of many students have also taken their wards after the incident.

The major development that has come in regarding the Chandigarh University protest case is that the Himachal Police have arrested the youths who have been accused in this case. The accused whose picture was given by the girl was taken into custody from Shimla and the other one, named Sunny Mehta has been arrested from Rohru. The girl who has been accused in the whole incident is also a resident of Rohru. The two accused boys have now been handed over to the Punjab Police who will now be investigated regarding their intention behind asking for the videos and making them viral.

The students of the university have been protesting and asking the police and the administration to conduct a transparent inquiry into the whole matter. They have also asked to investigate why a lathi charge was done on students on Saturday.

On Sunday, the management of the university decided to lock the gates of the Tagore Hospital to pacify the protest but it took a worse turn as the girls joined the demonstration by climbing a 10 feet iron gate. The police force was also deployed on the campus when the Panjab University students joined the students of CU in the protest.

Till now, it has been claimed by both the management of Chandigarh University and the investigating officers that no personal video has gone viral and that things are being misconstrued. On hearing this, the students got fuming over the police.

It is being alleged by the students that the accused has herself agreed of having the videos of the hostel girls and making them viral as well. The thing that is creating a dilemma amongst people is that on one side the police are saying no videos have been found whereas the CM of Delhi, Arvind Kejriwal has tweeted saying that the accused sent many objectionable videos. Kejriwal also assured strict action in this matter. Punjab CM Bhagwant Mann has ordered a high-level inquiry into the matter.

The orders that have been issued by the Registrar of Chandigarh University state that September 19 and 20 will be observed as non-teaching days for all the students. The faculty and staff members of all departments will have to report to their respective offices as routine. Also, the essential services of the campus will continue.

The police have denied all the alleged information which stated that videos of 60 girls bathing have gone viral and according to them no case of suicide has surfaced, it was just that some students got a panic attack after listening to all sorts of information.

Punjab Police's Ropar range DIG Gurpreet Singh Bhullar and SSP of Mohali Viveksheel Soni said that the student had only sent her video to the boyfriend.