China on Friday said that it fired missiles over Taiwan for the first time, escalating tensions in the region as US House Speaker Nancy Pelosi arrived in Japan, whose leaders lodged a protest with Beijing after five projectiles landed near Japanese islands. 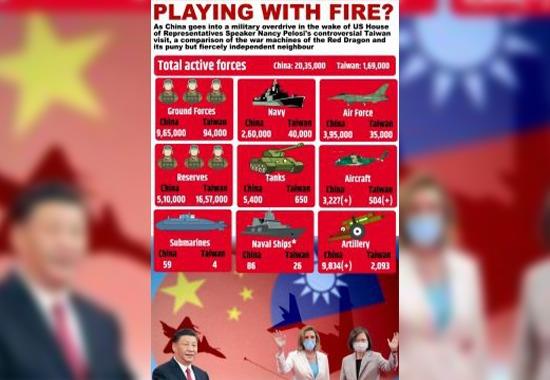 China on Friday said that it fired missiles over Taiwan for the first time, escalating tensions in the region as US House Speaker Nancy Pelosi arrived in Japan, whose leaders lodged a protest with Beijing after five projectiles landed near Japanese islands. Pelosi met Japanese Prime Minister Fumio Kishida on Friday morning, with their attention focused on the Taiwan Strait, where China is staging air and sea drills to protest against the US Speaker's visit to the island earlier this week, CNN reported.China has previously fired missiles into waters surrounding Taiwan -- a democratic island of 24 million that the Chinese Communist Party regards as its territory, despite having never controlled it -- most notably during the Taiwan Strait Crisis in the 1990s.But missiles flying over the island marked a significant escalation, with US officials warning there may be more to come, CNN reported."We anticipated that China might take steps like this -- in fact, I described them for you in quite some detail just the other day," John Kirby, a spokesperson for the US National Security Council, told reporters at the White House on Thursday. "We also expect that these actions will continue and that the Chinese will continue to react in the coming days."A US aircraft carrier will stay in the area around Taiwan for several more days to "monitor the situation", Kirby added.Speaking in Tokyo on Friday, Pelosi accused China of trying "to isolate Taiwan", pointing to the island's exclusion from international groups like the World Health Organization.China started military drills around the island on Thursday, firing multiple missiles toward waters near northeastern and southwestern Taiwan the day after Pelosi's departure.A Chinese military expert confirmed on state broadcaster CCTV that the conventional missiles flew over Taiwan's main island, including airspace covered by Taiwanese defence missiles, CNN reported."We hit the targets under the observation of US Aegis combat system, which means the Chinese military has solved the difficulties of hitting long-range targets on waters," said Maj. Gen. Meng Xiangqing, a professor of strategy at the National Defence University in Beijing.
In a statement late Thursday, Taiwan's Defence Ministry said the missiles had travelled above the atmosphere and therefore posed no risk to the island, CNN reported.