Major air and sea drills by the Chinese military in the waters encircling Taiwan resumed on Thursday, shortly after the end of a visit to the island by Speaker of the US House of Representatives Nancy Pelosi that has drawn Beijing's ire. 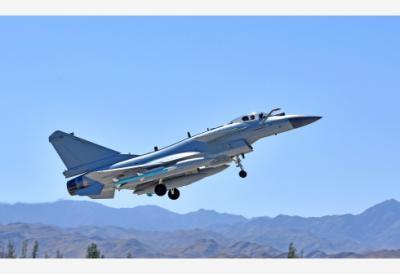 Major air and sea drills by the Chinese military in the waters encircling Taiwan resumed on Thursday, shortly after the end of a visit to the island by Speaker of the US House of Representatives Nancy Pelosi that has drawn Beijing's ire.
China's eastern military command said that at about 1 p.m. (local Beijing time) units of the People's Liberation Army (PLA) "implemented long-range fire live firing training in the Taiwan Strait and conducted precise strikes on specific areas in the eastern part of the Taiwan Strait," which separates mainland China from the island, reports dpa news agency.
The exercises, which began on Tuesday, started in full at six locations surrounding Taiwan, coming as close as 9 nautical miles (16.7 km) from its two major sea ports in Keelung and Kaohsiung.
For the first time, the declared areas where the exercises are being held partly cross into Taiwan's territorial waters.
They were set to end on Sunday.
State media cited China's military and various experts as saying that the manoeuvers were practice for imposing an aerial and maritime blockade of the self-governing island, and even for a potential invasion.
Chinese military representatives have not ruled out that the PLA could fire missiles over Taiwan for the first time.
The drills, which were to include missile tests and shooting drills, are apparent retaliation for the visit by Pelosi, the third-highest ranking official in Washington.
Pelosi's visit fuelled tensions between Beijing and Washington over Taiwan, which Beijing's ruling Communist Party views as part of its territory, claiming reunification is inevitable.
According to Chinese sources, the early announcement of the manoeuvres on Tuesday evening - immediately after Pelosi's arrival in Taiwan - was intended to give civilian vessels and aircraft sufficient time to reroute to avoid the area around the island.
A confrontation between China and Taiwan due to miscalculations by forces on either side could draw the US into the conflict.
The US officially recognizes the so-called One China policy but is also committed to Taiwan's defence, which so far has meant supplying weapons.
"We oppose any unilateral changes to the status quo from either side; we do not support Taiwan independence; and we expect cross-Strait differences to be resolved by peaceful means," the US State Department says on its website in a fact sheet on Taiwan relations updated at the end of May.
However, US President Joe Biden has made reference to the obligation the US has to defend Taiwan in the event of a Chinese attack.
Meanwhile, Taiwan has said it scrambled jets to warn off Chinese warplanes on Wednesday and its military fired flares to drive away unidentified aircraft over the Kinmen islands, located close to the mainland, reports the BBC.
Several ministries have suffered cyberattacks in recent days, the Taiwanese government said.
Taiwan has also asked ships to take different routes and is negotiating with Japan and the Philippines to find alternative aviation routes.