About 50 saints have tested positive and reports of around 200 saints are yet to come. In total, more than 2000 pilgrims including saints are hit by the infection. 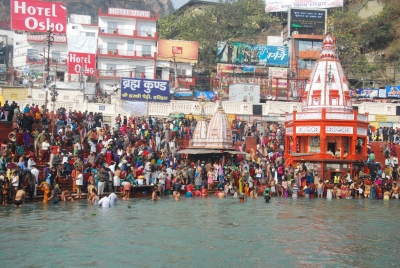 Amid the second wave of Covid 19, Kumbh Mela 2021 is being celebrated in Haridwar, Uttrakhand. The state witnessed mahakumbh of faith and is now witnessing mahakumbh of coronavirus. Many saints and other pilgrims are infected with the infection and more reports are awaited.

Meanwhile, the 13 arenas that came to Kumbh for royal baths have engaged in a skirmish, accusing each other of the spread of coronavirus in the fair. The Bairagi Akhara has alleged that the spread of infection started from the Sanyasi Akhara; Mahant Rajendra Das, president of the Nirmohi Akhara blamed Akhara Parishad president Mahant Narendra Giri for increasing number of cases.

Till now, 17 Niranjani Arena saints have tested positive including Mahant Ravindra Puri. About 50 saints have tested positive and reports of around 200 saints are yet to come. In total, more than 2000 pilgrims including saints are hit by the infection. Uttarakhand has witnessed an increase in corona cases by 8814% within a month. Earlier, Uttarakhand had reported only 172 cases from February 14 to February 28. From April 1 to April 15, Uttarkhand had reported 15,333 cases.

Also Read: After Sushant is it Kartik Aaryan's turn? Here’s what Kangana has to say

After the death of Mahamandaleshwar Kapil Dev of Mahanirvani Akhara died, the Niranjani Akhara had announced the end of Kumbh Mela. At this, seers of other arenas were displeased. They said that Niranjani Arana had no right to conclude the Kumbh. Nirvani Ani Akhada president Mahant Dharmdas said, “Only chief minister or the mela officer has the right to announce the end of Kumbh Mela”

Witnessing a huge surge in Covid cases after lakhs of people attended Kumbh, Prime Minister Narendra Modi has alleged people to make Kumbh 2021 symbolic to help the country fight against the infection. He tweeted, “Spoke to Acharya Swami Avdheshanand Giri Ji on the phone today. Enquired about the health of all saints. All the saints are providing support to the administration for smooth conduct of the affair and I thanked them for it.”