Blaming the Punjab Governor for deliberate and inordinate delay in clearing the file regarding regularization of the services of contractual employees, Punjab Chief Minister Charanjit Singh Channi on Saturday categorically said that Governor being the Constitutional head of the state was certainly functioning under the political pressure of BJP in wake of forthcoming assembly polls. 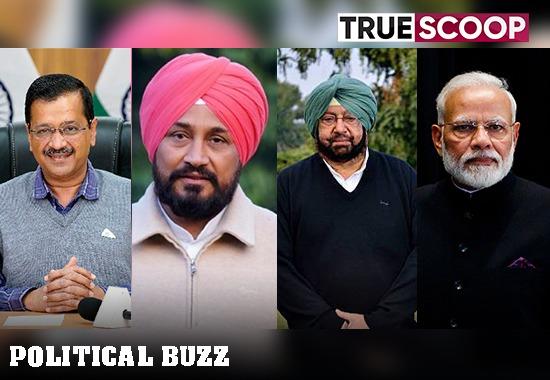 Blaming the Punjab Governor for deliberate and inordinate delay in clearing the file regarding regularization of the services of contractual employees, Punjab Chief Minister Charanjit Singh Channi on Saturday categorically said that Governor being the Constitutional head of the state was certainly functioning under the political pressure of BJP in wake of forthcoming assembly polls.
Addressing the media persons here, CM Channi at the very onset wished his heartiest greetings on the New Year and said that the Chief Secretary and even he had personally met Governor to get this file cleared adding that earlier he thought Governor might be busy elsewhere but now it is crystal clear that he was unnecessarily sitting over the file. CM Channi said it the question of future of several employees who had been anxiously waiting for a day when their services would be regularized at par with their peers working in the state government.
Pointing out further, CM Channi said that the state government has already got this legislation passed in the special session of Punjab Vidhan Sabha after thoroughly worked out all the modalities to pave a way for the regularization of these contractual employees with utmost care and caution.
Without mincing any words CM Channi said, “Come what may, if the need be he would not hesitate to stage a dharna in front of Raj Bhawan along with his Cabinet colleagues and party MLAs to safeguard the legitimate rights of employees.”
Earlier, CM Channi outlined the major pro-people initiatives taken by his government during 100 days like setting up of several chairs in the name of eminent personalities like Bhagwan Valmiki ji, Guru Ravidass ji, Bhagat Kabir ji, Bhagwan Parshuram ji, Bhai Jaita Ji (Baba Jiwan Singh), eminent statesman and architect of Indian Constitution Dr. BR Ambdekar and devout Sikh Bhai Makhan Shah Lubaana besides exclusive research centre on three epics of Ramayana, Mahabharat and Srimad Bhagvad Geeta.
Replying to a query for establishing another chair in the name of the legendary martyr Shaheed Udham Singh Sunam, CM Channi assured that he would certainly get this issue examined for setting up chair in recognition of the enormous contribution of iconic revolutionary in the national freedom struggle.
Emphasizing the need to intensify efforts to boost employment avenues for our unemployed youth, CM Channi said that his government is already in the advanced stage of implementing the Employment Guarantee Scheme which would be announced soon as the modalities in this regard have already been cleared.
He also mentioned that the process for regularization of services of 4587 safai sewaks and sewermen working on contract basis in various Urban Local Bodies is already under way as the notification in this behalf have already been issued. Likewise, CM Channi also said that the state government has now allowed fixed monthly allowance of Rs. 2500 to 22,000 Asha workers at a cost of Rs. 60 crore while the fixed allowance of 42500 mid day meal workers has too increased from Rs.2200 to Rs.3000 per month at an expenditure of Rs. 64.25 crore thereby fulfilling the long pending demand of these employees.
Replying to a query, CM Channi said that investigations by SIT in sacrilege cases were already underway and brought to the logical end at the earliest. Likewise, all the big sharks in drug mafia would also be dealt with severely as per the law of the land. Referring to the recent sacrilege case in Sri Darbar Sahib, CM Channi said that his government has already offered fulsome support and cooperation to the SGPC who was conducting investigation in the case at their own level.