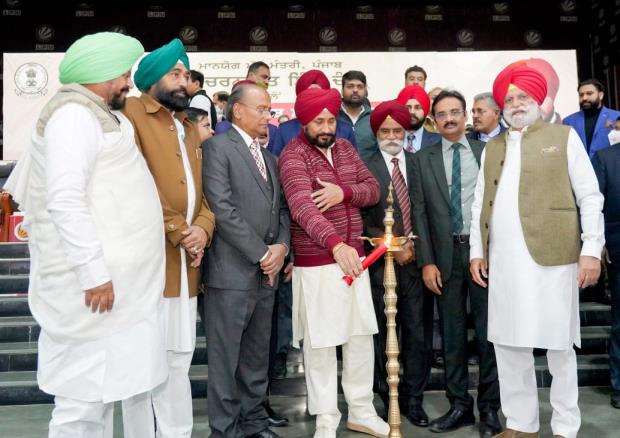 Punjab Chief Minister Charanjit Singh Channi on Tuesday announced to provide one lakh jobs to youth within a year.
Addressing a mammoth gathering here after launching the Punjab Government Rozgar Guarantee for Youth Scheme (PRAGTY) in the Lovely Professional University, CM Channi said that this is not merely an announcement but it is a commitment backed by a decision of Punjab Cabinet, to be passed later in evening. Amidst huge applause he announced that first decision of Congress government after being voted to power post polls will be to provide these jobs. CM Channi said that all the youths who had passed 10 plus two will be eligible for the job under this scheme.
CM Channi further said that this guarantee scheme will also ensure free coaching to the students for the competitive exams to civil services and Armed forces. He said that this coaching will be free to ensure that youth are immensely benefitted from it without putting any burden on their pocket. CM Channi said that the state government will also initiate start up courses for the youth across the universities in state.
Pointing out further, CM Channi said that it is a matter of great pride and satisfaction for all of us that hard working and resilient youth of the state have played a leading role not only in safeguarding the borders of state but also in sports and other fields. Likewise, he said that the Punjabi youth has also contributed immensely in development of foreign lands by working hard in those countries. CM Channi said that to facilitate the youth in going abroad and save them from clutches of fake travel agents Punjab government will soon embark a program to send youth abroad.
CM Channi further said that the state government will provide interest free loan to the youth for this purpose. Similarly, CM Channi also said that similar loans will also be extended to youth who are desirous of opening their own ventures. He said that apart from it the state government will also provide free coaching for IELTS, TOEFL and PTE to enable the youth to go aboard easily.
CM Channi said that elaborate tie up has been made with industrial tycoons to provide jobs to youth. He said that the day is not far when the youth of Punjab will further contribute generously in socio economic development of state. CM Channi envisioned that this initiative of the state government will go a long way in making youth of state gainfully employed besides opening new vistas of self reliance for them.
Striking an emotional chord with youth, the Chief Minister said that he has worked hard by almost doing every work to mitigate the woes of his family. CM Channi said that he has himself faced the hardships so he knows the value of work. He said that every effort will be made to ensure that youth are benefitted from this scheme.
On the occasion Cabinet Minister Rana Gurjit Singh, MLAs Mr Sushil Kumar Rinku, Mr Rajinder Beri, Chaudhary Surinder Singh, Mr Santokh Singh Bhalaipur, Mr Tarsem Singh, Mr Balwinder Singh Dhaliwal and Mr Raj Kumar Chabbewal, former Minister and Chairman Punjab Agro Industries Corporation Mr Joginder Singh Mann, Singh Gora Gill, Acting President District Congress Committee Kapurthala Mr Daljeet Singh Raju, Acting President District Youth Congress Kapurthala Mr Harnoor Singh Harji Mann and others were also present.
Earlier, Chancellor of Lovely Professional University Mr Ashok Mittal welcomed the Chief Minister and other dignitaries.
Prominent amongst others present on occasion included Deputy Commissioner Ms. Deepti Uppal and Chairman Lovely Group Mr Ramesh Mittal.