Code M season 2: TV's Maya i.e. Jennifer Winget has been in the headlines for some time now for her upcoming series. She made her OTT debut with a web series called Code M. 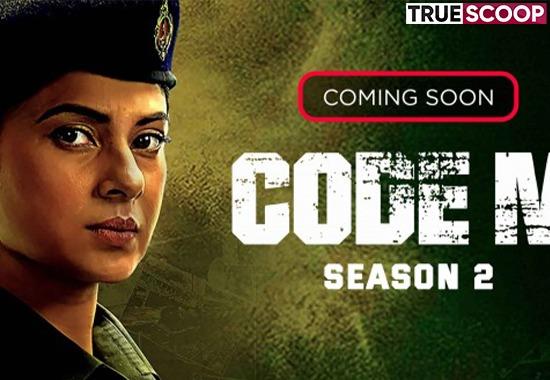 Code M season 2: TV's Maya i.e. Jennifer Winget has been in the headlines for some time now for her upcoming series. Jennifer Winget made her OTT debut with a web series called Code M. In this series of Voot, she played the role of Monica Mehra. Now the 2nd season of this series to be released on 9th June 2022.
Recently the second season trailer was launched which got quite a good response. In the series, Jennifer is playing the role of Monica, who is winning the hearts of fans in the incarnation of an Army officer.
In the first season, a soldier from the army kills another soldier by taking her on a false mission and he also kills some innocents to hide this lie. Monica Mehra (Jennifer Winget) is called to investigate this case and solve this case from the root.
What's the story-
The trailer reveals that Jennifer has been promoted in the 2nd season and she has been hired to solve an even deeper cause. This matter is so serious that the matter reaches the Chief Minister. Someone tries to kill Shakhya CM. Someone tries to kill the Chief Minister from the Army base camp.
Also Read: Tejasswi Prakash becomes 'camerawoman' to join paparazzi in clicking BF Karan Kundrra's photos; Watch
But it is not known who that person is. Monica i.e. Jennifer Winget has been called to solve this case. Whether she will be able to complete this operation successfully or not will be known only after watching the web series of Code M Season 2.
When and where will the release be-
The 2nd season of 'Code M' has been directed by Akshay Choubey, which will be streamed on OTT Platform Vote on June 9. The series will have a total of 8 episodes. ‘Code M Season 2’ is being presented by Jio Studios. While Ekta is produced by R Kapoor.
Star Cast
- Jennifer will be seen playing the role of Monica in the main role in the series which will be a military lawyer. Apart from these, there are probably some casts that you will see like Rajat Kapoor, Shurveer Chauhan, Major Gaurav Shekhawat, Keshav Sadhana, and Alekh Kapoor. Apart from this, a lot of people are going to be seen this season.
Jennifer has already won the hearts of fans through many shows. These include serials like Bepnah, Behad, Kasauti Zindagi Ki and Dil Mil Gaye. She has worked in the world of TV for a long time. Jennifer has also worked as a child artist. She has acted in serials like Shakalaka Bumbum and Akele Hum Akele Tum.