A pregnant woman named Prakashlakshmi tried to enter the World Book of Records by walking barefoot on 30 fluorescent lights. During this, she also demanded strict laws against cases of sexual harassment. 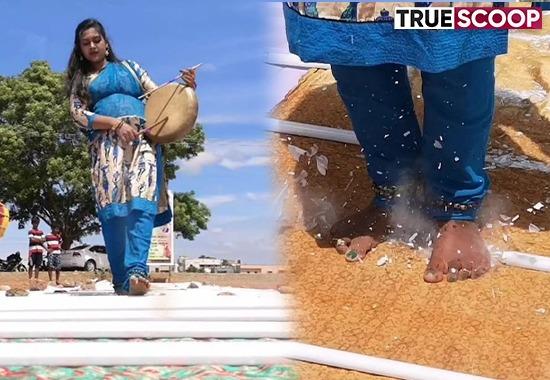 Coimbatore: Everyone is demanding a stricter law against the increasing cases of sexual harassment in the country. On the other hand, a pregnant woman in Coimbatore made this demand uniquely on Sunday. Here a pregnant woman named Prakashlakshmi tried to enter the World Book of Records by walking barefoot on 30 fluorescent lights. During this, she also demanded strict laws against the cases of sexual harassment.
The traditional art enthusiast Prakashlakshmi attracted the attention of those in power by demanding to make stricter laws on sexual harassment and strengthening the penal code to provide severe punishments. For this, she tried to make a record by breaking fluorescent lights by foot in 3.55 seconds while beating the drum.
The event was organized by the woman's husband Kalairasan in association with Phoenix World Books Records. The officials of the Phoenix World Book Records honoured the woman with a certificate and a book, recording the woman's achievement.
The organizers of the event gave this information. They said that the video of the woman trying to make a record is going viral on social media. They also said that Kalairasan, the husband of pregnant woman Prakashakshmi, gives free coaching to the students in the traditional arts of Tamil Nadu like oyilattam, karakattam, drum-beating etc.

What is sexual harassment?
Sexual harassment is an unwelcomed sexual behaviour that’s offensive, humiliating or intimidating. It can be written, verbal or physical, and can happen in person or online.
Anybody can experience sexual harassment, regardless of their gender. When it happens at work, school or uni, sexual harassment may amount to a form of discrimination.
What does sexual harassment include?
Sexual harassment can include someone:
Touching, grabbing or making other physical contact with you without your consent,
making comments to you that have a sexual meaning,
asking you for sex or sexual favours,
leering and staring at you,
displaying rude and offensive material so that you or others can see it,
making sexual gestures or suggestive body movements towards you,
cracking sexual jokes and comments around or to you,
questioning you about your sex life,
insulting you with sexual comments,
behaviour on a phone call that makes you feel uncomfortable,
indecently exposing themselves to you,
sexually assaulting you.