In a press conference held in Jalandhar today, Chairman CT Group claimed that students along with supporters of unknown political parties have illegally seized their campus due to non-issuance of degrees, while police has become a mute spectator. He also appealed to the district administration to intervene in the matter and evacuate the college campus from protesters. 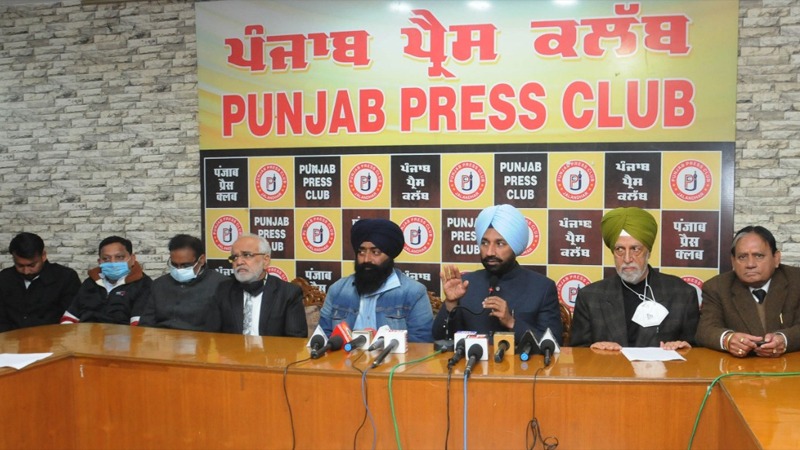 Citing the example of what’s happening in CT College, the members of JAC, informed the media persons that the hundreds of SC students along with supporters of some political parties has forcibly seized the college campus, in regard to the non-issuance of degrees to the students under Post Matric Scholarship.

The members said that the Punjab Government owes Rs 39 crore to CT College under Post Matriculation Scholarship (PMS). Most students have passed or have completed a 3-4 year course; however, the government has miserably failed to release their fees.

Dr. Gurmeet Singh Dhaliwal, Chairman, JAC, said that about 1650 unaided colleges in Punjab are enrolling more than 2.5 lakh students, but since the last 3-4 years the colleges haven’t received their funds under post-matric scholarships. They questioned that “How will the colleges function as the government is not releasing the outstanding scholarship amount nor the students are paying the fees”?

Jagjit Singh, President JAC, said that it’s really unfortunate that an educational institute was being forcibly closed down. “We have been providing free education to SC students for the last many years. Till date, we haven’t demanded fees from any SC student, nor is the government releasing the funds. Moreover, the funds would come in the face of fees directly into the bank accounts of students; however, the students have already completed their respective courses. Therefore, we are helpless and forced to withhold students' degrees until we receive the pending dues”, he said.

Expressing his concern, CT Group Chairman, Charanjit Singh Channi said that this issue is quite old now but still the educational institutes are suffering because of lack of serious approach by the Government. He said that the government has to pay back around Rs. 39 crore to the college and above that the protesters of less known political parties have forcibly entered the campus and are holding a loud protest, just in order to gain vote bank for forthcoming elections.

“He said that they have captured the campus from inside and are creating ruckus, due to which, the female staff members and students who are residing in the campus hostel are feeling unsafe as the protesters may turn violent anytime. They already burnt photographs placed at the reception area. The staff members etc are scared to enter the campus now. The situation has become helpless and we seek complete support from district administration and reach to the Government in order to resolve this issue at the earliest”, he added.

Ashok Mittal, Chancellor, Lovely Professional University, and Satnam Singh Sandhu, Chief Patron, JAC, said that Scheduled Castes in Punjab are close to 32% and they are dependent on scholarship schemes for higher and technical education. “We request the Punjab Government to intervene in this matter and release the outstanding scholarship amount as soon as possible to provide financial relief to the unaided colleges of Punjab”.

Anil Chopra, Chairman, St. Soldier Group and Vipan Sharma, Vice President, JAC said that Doaba has a large population belonging to the SC community and due to which the enrollment of unscheduled students is higher than other places. Therefore, the amount owed to the government of this region is also high. “Therefore, to save the educational institutes, the government must release the pending amount”, he said.