Police in New York suburbs have announced the arrested of a gang of illegal immigrants from Colombia targeting Indian-origin people and striking fear in the community. Author : Rakesh Behal 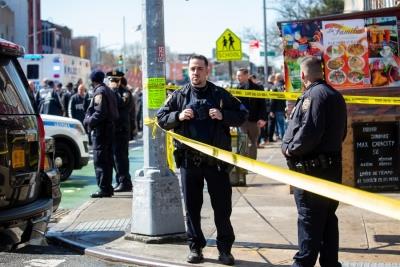 Police in New York suburbs have announced the arrested of a gang of illegal immigrants from Colombia targeting Indian-origin people and striking fear in the community.

In Hicksville and New Hyde Park, the gang of four would pretend to be public utility workers and follow Indians to their homes to rob them, police in Nassau County adjoining New York City on Long Island said on Wednesday.

Nassau Police Commissioner Patrick Ryder said at a news conference: "They would watch those coming out of the Patel store or the jewellery store or getting their nails done. They follow them to their residence" and rob them.

Indian-origin people across the US have often been targets of robbers because they are believed to have lots of jewellery.

The four, who had been under surveillance, were caught in another suburb, New Hyde Park, where they had targeted a house after following a woman, police said.

When they tried to pry open a door, the glass broke and a woman inside screamed causing them to try to flee and they were caught by the police surveillance team, Ryder said.

He said that they had an AK-47 automatic rifle, which they had stashed across from the house.

A neighbour, Anita Ramolia told WCBS TV that she saw the police action when she was out walking her dog.

"It's scary. I mean, I'm home and it's constantly on my mind," she told the station.

Another neighbour, Tejal Patel, said: "It happened two blocks from my house, 5 o'clock in morning. It is really terrifying", the station reported.

The station quoted police as saying that 20 to 30 per cent of cases in the area with a similar pattern were likely linked to the four.

According to police, they had entered the US through the border in Arizona, California, and Texas.

Nassau County's top election official, a Republican, slammed the immigration policy of the federal government at the news conference.

County Executive Bruce Blakeman said, "These individuals should never have been allowed to make their way into the United States. They were caught at the border and rather than be detained, they were let go."

Mohammed Kashif in Hicksville told WCBS TV, "The law has to be in place for these guys. It has to be a little more strict so they feel the pain."