Haryana Chief Minister Manohar Lal Khattar on Saturday raised contentious issues of the state, including the Sutlej-Yamuna Link (SYL) canal as surplus and un-channelled water is flowing to Pakistan, appointment of members in the Bhakra Beas Management Board (BBMB) from the state and a new complex for the state legislative assembly. 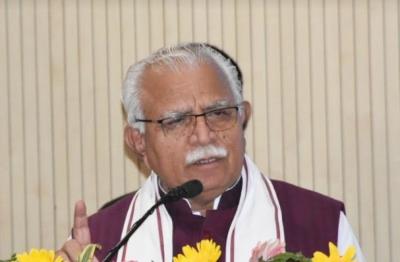 Haryana Chief Minister Manohar Lal Khattar on Saturday raised contentious issues of the state, including the Sutlej-Yamuna Link (SYL) canal as surplus and un-channelled water is flowing to Pakistan, appointment of members in the Bhakra Beas Management Board (BBMB) from the state and a new complex for the state legislative assembly. The Chief Minister, while attending the meeting of the Northern Zonal Council, chaired by Union Home Minister Amit Shah here, said the meeting would be helpful in promoting cooperative federalism as well as in resolving various issues of inter-state and between the Centre and the states in a time-bound manner.Khattar said though Haryana is a small state in terms of area and population, but it has a significant contribution to the country's economy.The per capita income of the state is Rs 274,635, which is the highest among the big states of the country. Also, on the parameters of economic growth rate, Haryana is also among the leading states in the country.The Chief Minister said the completion of the construction work of the SYL canal is a long-pending and serious issue between Haryana and Punjab. "Due to the non-completion of the SYL canal, surplus and un-channelled water of the Ravi, the Sutlej and the Beas goes to Pakistan."He said Haryana has also been allotted a 3.50 million acre-feet share in the surplus water of the Ravi-Beas as per the order of the government of India of March 24, 1976.As per the decision taken in the meeting of the Union Jal Shakti Minister on August 18, 2020, with the Chief Ministers of both the states on the direction of the Supreme Court to resolve the issue, Punjab is not taking further action, said Khattar.The Chief Minister said through a semi-official letter of May 6 he had requested the Union Minister of Jal Shakti to convene the second-round meeting of the Chief Ministers at the earliest to discuss this issue. Besides, he had written a semi-official letter to the Home Minister, requesting to organise a meeting of the Chief Ministers of both the states."Water is very important for Haryana. On one hand, we are not getting the water, on the other Delhi is demanding more water from us," said the Chief Minister.On getting water from the Bhakra main line canal, the Chief Minister raised the issue of getting 700-1,000 cusecs less water.He said a committee consisting of Chief Engineers and officers of the BBMB from the participating states has also found that Haryana has been given less distribution of water at the Bhakra main line canal contact point.The committee has now suggested the appointment of a third agency with the latest discharge measurement techniques to lay the gauge and discharge curve for the entire distribution system from the head to all contact points in the participating states.Highlighting the issue of appointment of members in the BBMB, the Chief Minister said the previous tradition of nominating a Member (Irrigation) from Haryana should be continued on similar lines of the nomination of a Member (Power) from Punjab."If there is interference in the processes which is going on for the last about 56 years, it will affect the interests of Haryana, especially in the context of Sutlej-Beas river water sharing. If the permanent members of the BBMB are from outside the participating states, they will not be able to understand local issues and problems. Therefore, in addition to appointing the Member (Irrigation) from Haryana and the Member (Electricity) from Punjab, a third, Member (Personnel), can also be appointed to the board."This third member may be appointed alternately from Rajasthan and Himachal Pradesh" said Khattar.Raising the new complex of legislative assembly, the Chief Minister said a new delimitation is proposed in 2026 on the basis of which Lok Sabha and Vidhan Sabha elections will be held in 2029.It is estimated that according to the population of Haryana in the new delimitation, the number of assembly constituencies will be 126 and the number of Lok Sabha constituencies will be 14.
"At present, there are 90 MLAs in the Haryana legislative assembly. There is not enough space available in the existing building to even accommodate these 90 MLAs. Not only this, but it is also not possible to expand this building, because it is a heritage building. It is, therefore, requested that sufficient space may be given in Chandigarh for the construction of a new additional building for the Haryana Vidhan Sabha," he added.