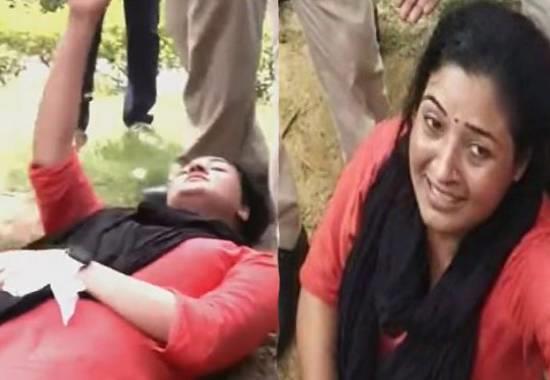 Congress leader Alka Lamba became a 'meme material' after a video of her scuffle with the Delhi Police officials went viral on Tuesday. Alka Lamba Delhi Protest video went viral in no time after she got involved in a verbal exchange in a high-voltage drama during the protest over ED summoning Rahul Gandhi and the Agnipath scheme.
In the Alka Lamba viral video, the Congress leader can be seen raising slogans, sitting on the road with women workers. However, when the Police officials forcibly tried to lift her she started screaming and also narrated the pain of the crying youth. Not only this, she also lies down on the road after Police tried to lift her.
Watch Alka Lamba Delhi Viral Video
Also Read: Day 5: Rahul Gandhi questioned for 9 hours without lunch break

As per reports, Alka Lamba along with other women Congress workers started protesting by sitting on the road. As a result, the traffic started getting affected. Therefore, the Delhi Police officials tried to persuade her to not sit on the road. However, Lamba did not bow down, and therefore, the Police officials tried to lift her up. The entire incident was caught on camera and ever since then, Alka Lamba Delhi viral video is doing rounds on social media.