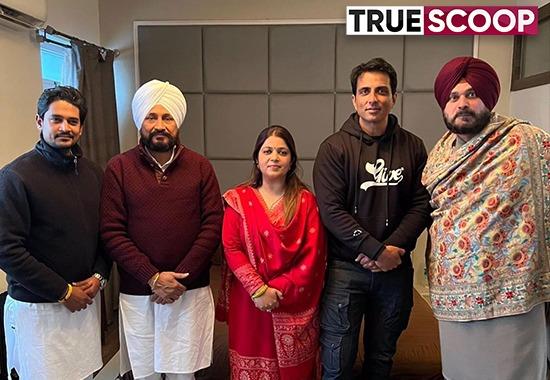 Ahead of the five-party battle in Punjab, Sonu Sood’s Sister, Malvika join Congress. The actor’s sister will contest the Punjab 2022 elections representing the party. The MLA of Moga has revolted against the decision. Punjab is all set to go into polls on the 14th of February.
Malvika joined the party in the presence of congress president Navjot Singh Sidhu and Punjab CM Charanjeet Singh Channi.
Navjot Singh Sidhu described it as a “game-changer” in the political layout of the state. He goes on to say—"Sonu Sood is known all over the world for his humanity and kindness & today a member from that family is joining us. She is an educated woman.”
Punjab’s CM was also quoted saying: “It's a fortunate thing that a person from such a good family is coming to our party”
The actor who got worldwide fame for his humanitarian actions during the Covid-19 pandemic completely supports his sister. Malvika in a press conference said that the only purpose of her entry in politics is to serve people like her brother.
Also Read: Viral Video: How CM Channi Helped an Injured Man on His Way to a Political Rally
Sonu Sood said—“ It is very rare that a party chief and the chief minister both have gone to someone's home to grant the honour, and she deserves it”
The joining of Malvika was done at the actor’s residence in Moga district where on 14th November the actor said that his sister would join politics.