Constitution Day 2021: What is it and why it is celebrated on Nov 26, click to know

Constitution Day is celebrated on November 26, since November 19, 2015. Before this, the date was celebrated as “National Law Day”. 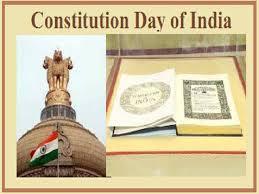 However, the date, before 2015, was celebrated as National Law Day.

The day also remembers Dr Bhim Rao Ambedkar, who was the first chairman of the drafting committee that drafted the Constitution of India. 26 November was chosen to spread the importance of the constitution and to spread the thoughts and ideas of Ambedkar.

In 2015, the nation celebrated the 125th birth anniversary of the father of the Indian constitution – Dr BR Ambedkar, “in a big way”.

A special committee chaired by the Prime Minister of India was announced for year-long celebrations. Various programmes were held by various ministries and departments throughout the year to spread the thoughts and ideas of Ambedkar. As part of the celebrations, the Prime Minister of India Narendra Modi announced that 26 November will be celebrated as “Constitution Day”, while laying the foundation stone for an Ambedkar memorial at the Indu Mills compounds in Mumbai in October 2015.

Constitution Day: How to celebrate the day in 2021?

As a part of Constitution Day celebrations this year, Prime Minister Narendra Modi will participate in the programmes being organised in Parliament and Vigyan Bhawan on 26th November 2021, according to the official statement by PMO.

Prime Minister will inaugurate the two-day Constitution Day celebrations organised by the Supreme Court, at 5:30 PM in Plenary Hall, Vigyan Bhawan, New Delhi. All Judges of the Supreme Court, Chief Justices of all High Courts and senior-most puisne Judges, Solicitor General of India, and other members of the legal fraternity will be present on the occasion. Prime Minister will also address the distinguished gathering, inform the PMO statement.