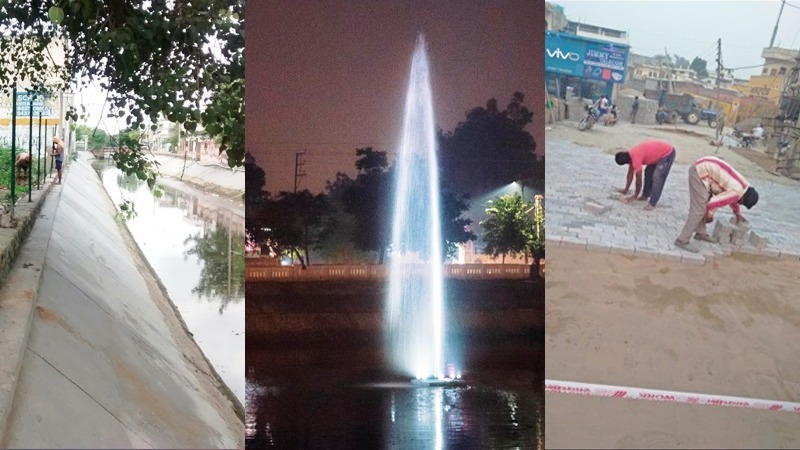 District Public Relations Office, Patiala, December 30: Despite fighting Covid, Royal City Patiala continued to move ahead in development works this year.  Thanks to the special efforts of the Chief Minister Captain Amarinder Singh and Member of Parliament, Mrs. Preneet Kaur, Patiala has became the headquarter of two more  Universities ( Jagat Guru Nanak Dev Punjab State Open University and Maharaja Bhupinder Singh Punjab Sports University) this year and has been successful in bringing development as well as heritage projects of the city to its destination.

According to Deputy Commissioner Kumar Amit, Covid's strike, which started in last week of March, though initially derailed the development projects once and for all, but the Health, Civil and Police administrations of Patiala had managed to curb it.  Infact, by adopting measures to stop further spread of COVID, we also tried to give full attention to the welfare of the people by rescheduling the development works, added Mr Amit.

He said that the Chief Minister Captain Amarinder Singh and Lok Sabha Member Mrs. Preneet Kaur kept a close eye on the ongoing campaign against COVID in Patiala and also reviewed the development works of Patiala online as well, which made us able to set the pace of development to continue.

According to the Deputy Commissioner, the projects initiated to preserve the royal and heritage look of Patiala, the revival of Rajindra Lake and the maintenance of the historic Barandri have almost been completed. Rajindra Tank (Lake) has returned to normalcy after nearly a decade and a half and the open gym, lighting, walkways and other activities have been improved at Barandri Bagh.  Both the projects have cost about Rs 584 lakh.

Similarly construction of another important heritage project of the city, Heritage Street was also started by the Chief Minister Captain Amarinder Singh in October this year. The project with a budget of about Rs. 43 crore is underway.

The Surface (Canal based) Drinking Water Supply project for Patiala city, which is worth Rs.503 crore has also been successfully started this year.  The completion of this project, which has been designed keeping in view the potable water needs of the city for the next three decades, would be of great benefit to the people of the city.

Apart from the aforesaid project, the plan to solve the problem of huge dump piles on Sanour Road in the city, was also implemented this year at a cost of Rs 6 crore.  The project is also underway, which has led to a solution to the years-long problem of garbage disposal.

Plans to move the dairies out of the city and to relocate Ragho Majra's Rehri Market to another place to reduce the chaos in the city are almost near completion.

The plan to take the city bus stand out of the congestion was also implemented this year and the laying of its foundation stone on the Rajpura Bypass by the Chief Minister Captain Amarinder Singh paved the way for its speedy construction.

Apart from this by adding further, Deputy Commissioner Mr. Kumar Amit said that beautification work of Chhoti and Badi Nadi has also been undertaken.  The Chief Minister Captain Amarinder Singh had announced a grant of Rs. 208 crore for the completion of this project.  Under this, a 26 MLD capacity STP to be constructed at Ghalori Gate. There will be a check dam between the two rivers as well as a 3.45 km cycling track.

Similarly, the problem of storm water sewage being faced by the city residents has also been resolved as the covering of Eastern Drain and channelisation of Jacob Drain is near completion at the cost of Rs 6.89 and Rs. 5 Crore respectively.

He further said that similarly under Smart Village Campaign, development works have been carried out in all the villages of the district under the first phase at a cost of Rs. 43.51 Crore  while under the second phase development works worth Rs. 121 crore have been started.  Apart from this, an amount Rs 45.26 crore has also been released by the 15th Finance Commission for Swachh Bharat Mission, infrastructure upgradation of water supply, schools, parks, street drains, ponds and other development works in the villages.