COVID VACCINE-Four sites for 15 to 18 years age group, nearly 1.10 lakh beneficiaries to get jab in Jalandhar.

view of Special Vaccination Drive to be launched from Monday, decks have been cleared by the District Administration to facilitate nearly 1.10 lakh beneficiaries between 15 to 18 years of age during this drive. 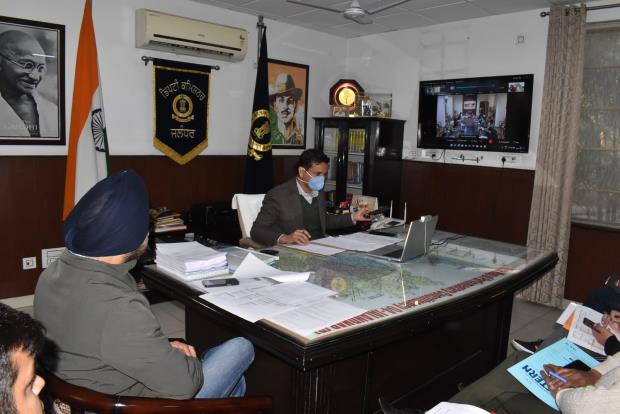 view of Special Vaccination Drive to be launched from Monday, decks have been cleared by the District Administration to facilitate nearly 1.10 lakh beneficiaries between 15 to 18 years of age during this drive.
While holding a meeting with the officers of health department on Sunday evening, the Deputy Commissioner Ghanshyam Thori revealed that covaxin would be administered to the children between the age group of 15 to 18 years, for which administration had selected four sites. These doses will be given at ESI Dispensary No. 1 & 3, Shri Mahavir Jain School, Vijay Nagar (Shakti Nagar), Urban Primary Health Centre, Garha and Maqsudan. Thori said that all SMOs had already been directed to ensure adequate arrangements at block level for smooth conduct of vaccination. He said any eligible beneficiary could get the jab at session sites with on the spot registration by furnishing Aadhar card and other photo ID cards as proof.
The Deputy Commissioner also informed that the booster dose would also be given in the district from January 10. The booster dose will be administered to poll staff, health & front line workers and patients with co-morbidities above 60 years age.
In larger public interest and health safety of children, the Deputy Commissioner urged the people to get their wards vaccinated. He said that timely vaccination and adhering to appropriate health behaviour could contain the further spread of virus so that parents should also motivate the children for getting Covid vaccine.
Earlier, participating in the virtual meeting presided over the Chief Secretary Anirudh Tiwari, the Deputy Commissioner   informed the meeting that as many as 6000 doses were being administered in the district per day. He said that 93 percent eligible beneficiaries had received the jab of first dose while 61 percent of second dose so far.
Additional Deputy Commissioner (D) Jaspreet Singh, ADC (UD) Himanshu Jain and others were also present in the meeting.