After the BJP on Saturday blamed India's first Prime Minister Jawaharlal Nehru for the Partition of the country, the Congress shared Nehru's famous 'Freedom at Midnight' speech of 1947 on different social media platforms. 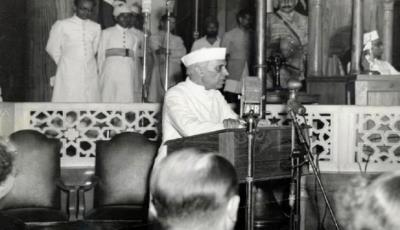 After the BJP on Saturday blamed India's first Prime Minister Jawaharlal Nehru for the Partition of the country, the Congress shared Nehru's famous 'Freedom at Midnight' speech of 1947 on different social media platforms.

Incidentally, in the four-page handwritten draft of the speech, Nehru had written "Date with destiny", which he had changed to but "Tryst with destiny" while delivering his speech.

While the BJP is blaming Nehru for Partition, in his speech the first Prime Minister of India had mentioned Partition and outlined Indias future that is of "peace and prosperity" with no place for "narrrow mindedness".

On the issue of Partition, Nehru had said in his speech, "We think also of our brothers and sisters who have been cut off from us by political boundaries and who unhappily cannot share at present in the freedom that has come. They are of us and will remain of us whatever may happen, and we shall be sharers in their good and ill fortune alike."

In the speech, Nehru started, "Long years ago, we made a tryst with destiny, and now the time comes when we shall redeem our pledge, not wholly or in full measure, but very substantially.

"At the stroke of the midnight hour, when the world sleeps, India will awake to life and freedom. A moment comes, which comes, but rarely in history, when we step out from the old to the new, when an age ends, and when the soul of a nation, long suppressed, finds utterance."

While the BJP has been blaming Nehru for different reasons for long, in his speech he had said, "Freedom and power bring responsibility. And the past is over and it is the future that beckons to us now."

Nehru also said that the ambition of the greatest man of our generation has been to wipe every tear from every eye.

"That may be beyond us, but as long as there are tears and suffering, so long our work will not be over. Peace has been said to be indivisible; so is freedom, so is prosperity now, and so also is disaster in this one world that can no longer be split into isolated fragments," he had said.

"We have to build the noble mansion of free India where all her children may dwell," Nehru had said while drawing the outline of the future of India.

He said, "Rejoice in that freedom, even though clouds surround us, and many of the people are sorrow-stricken and difficult problems encompass us. But freedom brings responsibilities and burdens and we have to face them in the spirit of a free and disciplined people."

Nehru also mentioned Mahatma Gandhi in his speech, saying, "On this day our first thoughts go to the architect of this freedom, the father of our nation, who, embodying the old spirit of India, held aloft the torch of freedom and lighted up the darkness that surrounded us.

"Our next thoughts must be of the unknown volunteers and soldiers of freedom who, without praise or reward, have served India even unto death."

Nehru had concluded his speech by saying: "To the nations and peoples of the world we send greetings and pledge ourselves to cooperate with them in furthering peace, freedom and democracy.

"And to India, our much-loved motherland, the ancient, the eternal and the ever-new, we pay our reverent homage and we bind ourselves afresh to her service."

Earlier, on the occasion of 'Partition Horrors Remembrance Day', the BJP had blamed the Congress and the Communists for accepting the demand of the Muslim League for a separate nation.

In an over seven-minute video released by the saffron party on Sunday, the BJP indirectly blamed Nehru and Congress leaders for bowing to the demand of a separate nation raised by the Muslim League led by Muhammad Ali Jinnah, instead of opposing it.

Hitting back at the BJP, Jairam Ramesh said in tweet, "The tragedy of Partition cannot be misused to fuel hate & prejudice. The truth is Savarkar originated 2 nation theory and Jinnah perfected it. Sardar Patel wrote, 'I felt that if we did not accept Partition, India would be split into many bits and would be completely ruined'."

Ramesh also said that the "modern day Savarkars and Jinnahs are continuing their efforts to divide the nation".

"The Indian National Congress will uphold the legacy of Gandhi, Nehru, Patel and many others who were untiring in their efforts to unite the nation. The politics of hate will be defeated," Ramesh said in another tweet.