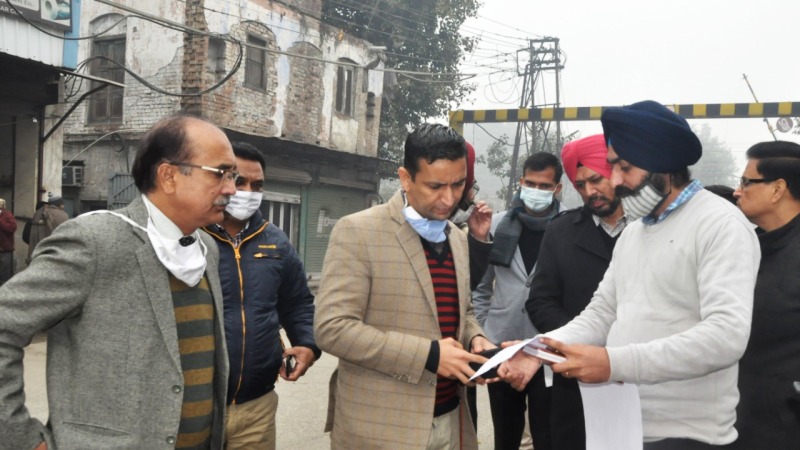 Jalandhar, January 21- To give much-needed relief to the city residents from the traffic jams at Tanda railway crossing, Deputy Commissioner Ghanshyam Thori has proposed the construction of Railway Under Bridge (RUB) to Northern Railway at this crossing which falls on one of the busiest Amritsar-Delhi rail route.

Deputy Commissioner Ghanshyam Thori who visited the site on Thursday along with a battery of officials from the Public Works Department (PWD), Railway Jalandhar, Municipal Corporation, revenue, said that the PWD and Railway Jalandhar have given their feasibility reports about the construction of RUB here.

He said as per reports, a RUB with a length of 350 meters and a width of 5.0 meters can be built at the site for which required land and other infrastructure is also available. He said that service lanes at both sides of the crossing have also been proposed apart from RUB.

He said following the survey report of PWD, a team of Jalandhar railway officials have also checked the feasibility here and have given the green signal.

He said that at this railway crossing, the train vehicle unit has crossed the mark of 5 lakh and it has qualified the criteria for the construction of RUB/ROB here which is one lakh as per railway policy.

He said this railway crossing remains closed most of the time due to the heavy flow of trains which causes long queues of traffic jams here. Sometimes, this crossing remains shut for half an hour, leading to major inconvenience to people, he said.

Thori told that residents of the city were also raising demand for RUB at this railway crossing for the past few years as it has also become a bugbear for them.

Deputy Commissioner said complete General Arrangement Drawing has also been submitted to DRM Ferozepur Northern Railway for his principal approval for RUB which would facilitate the lakhs of commuters, traders, and residents.

Meanwhile, Ghanshyam Thori also supervised the work of shifting electric poles and wires at the Ladhewali railway crossing. It is pertinent to mention here that the Public Works Department Minister Vijay Inder Singla had laid the foundation stone of Railway Over-Bridge (ROB) at Rs 23.50 crore on December 29.

He gave necessary directions to officials of PSPCL to ensure work completes soon so that the construction work of ROB begins at the earliest.

Get the latest update about Top Politics News, check out more about Politics, English, India & Trending