Delhi gets its first giant Smog Tower as 'Air Purifier'

At Lajpat Nagar, Delhi, first 20-feet-tall 'smog tower' has been installed to purify the air to combat pollution. 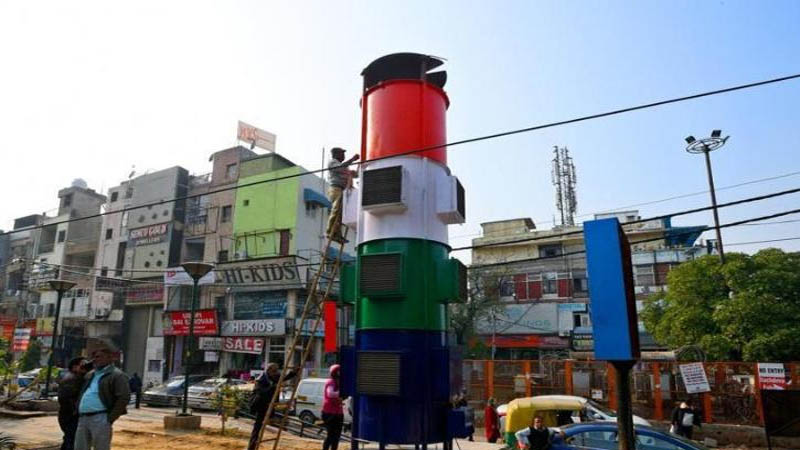 It has been inaugurated by Gautam Gambhir, a cricketer turned BJP MP with the collective efforts of Market Trader's Association worth ₹7 lakh.

According to the media reports, the smog tower has exhaust fans fitted within it which will suck air pollutants and will remove up to 80 percent particulate matters(PM 2.5 and PM10 pollutants). The tower aims at treating 2,50,000 to 6,00000 cubic meter air per day and will release fresh air in return.

The eminent project was undertaken by the IIT Bombay in collaboration with IIT Delhi and the University of Minnesota.

News has come from East Delhi MP Office, smog tower is a model if received success more should be installed in the city to purify the air.

The smog tower is 20-feet-tall. The giant air purifier has been made to stand on a 4 feet high platform on a covered drain near Veer Savarkar Marg in Lajpat Nagar. The total height of the tower from ground level is 24-feet.

The smog tower is a cylindrical structure with a big inlet and four outlet units. The tower is painted in four colours--orange on the top, white in the middle,  blue at the bottom and green just above the bottom.

The total cost of the device is ₹7 lakh but its running cost would be ₹30,000.

The Delhi government in the year 2018 installed anti-pollution tower at ITO. However, the pilot project failed to achieve desired results.

Hence, it is a matter of concern about the feasibility of smog towers. According to experts, smog towers are not suitable for Delhi's meteorological conditions. They further claim, no certain evidence can be seen to prove that the towers have actually purified air and improved its quality.

The initiative was taken after Supreme Court, in November 2019, asked the Centre and the Delhi government to come up with a road map on installing smog towers in the national capital region (NCR) to combat air pollution.

Billions of plastic particles released each time you brew a cup of Tea!