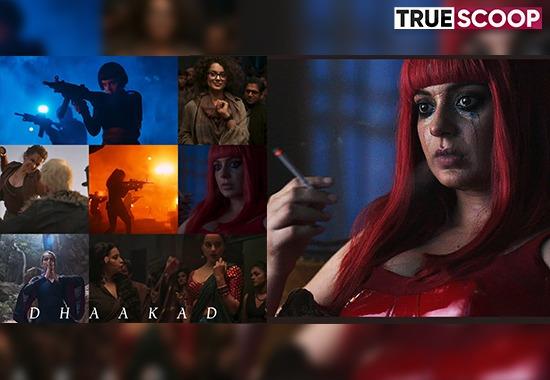 Dhaakad Trailer: The trailer of Kangana Ranaut's ambitious new action-thriller Dhaakad has been released.
In this trailer, Kangana appeared as Agent Agni, a spy who specializes in disguise and specializes in warfare. In the few minutes of the trailer, Kangana is seen using a gun as a toy and firing bullets at everyone and is seen doing tremendous action.
The film will be released on this day
Bollywood actress Kangana Ranaut is known for her strong acting. The actress has made a special place among the audience by playing an important role in many films so far.
The National Award-winning actress will be seen in a new avatar on the big screen, which the audience is excited to see. At present, people have liked the trailer. The film is scheduled to release on May 20, 2022.
Also Read: Kangana Ranaut: Instead of Hindi, Sanskrit should be the national language
Kangana will be seen in seven different looks
Reports say that Kangana will be seen in seven different looks in the film and will also be seen doing all her stunts and action sequences. In a social media post last year, Kangana claimed that the film has only one action sequence, which cost Rs 25 crore.
Arjun Rampal will also play the lead role in Dhaakad:
Dhaakad was directed by Razneesh Ghai and produced by Deepak Mukut and Sohail Makai. It is presented by Soham Rockstar Entertainment Pvt Ltd in association with Kamal Mukut, Sohail Maklai Productions and Asylum Films.
The film also stars Arjun Rampal, Divya Dutta and Shashwat Chatterjee.
Dhaakad - Agent Agni Trailer:
Kangana plays the role of Agent Agni, who faces the twin threat of child trafficking and exploitation of women.
The film's stunts were designed by an international team and the camerawork was done by award-winning Japanese cinematographer Tetsuo Nagata, who has worked in several Hollywood action films.