Remake of Korean film ‘The Terror Live’, Dhamaka is a taut hostage thriller. 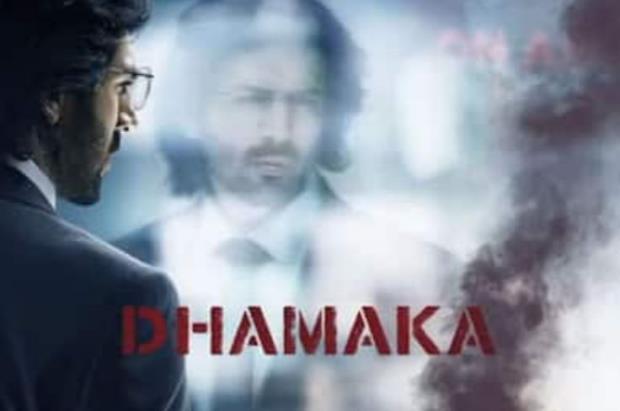 Dhamaka is 2021 Indian Hindi language thriller film directed by Ram Madhvani who also produced the film with Amrita Madhvani. Based on the 2013 film The Terror Live, the film stars Kartik Aaryan in the leading role of a journalist named Arjun Pathak, who receives a threat after he exclusively interviewed a terrorist, who blew up a bridge. The film also stars Mrunal Thakur and Amruta Subhash in prominent roles.

After being labelled as the monologue king, and having dabbled in romcoms such as Pyaar ka Punchnaama films, Sonu Ke Titu Ki Sweety, Pati Patni Aur woh, Luka Chhupi and so on, Kartik's Arjun Pathak in Dhamaka not only shows his range as an actor but also touches upon a different genre and emotion.

Director Ram Madhvani, who has directed Neerja and series Aarya in the past, creates a world within one room that is full of tension, action, reaction and a sense of urgency. Kartik Aryan was demoted from a prime-time news anchor to an RJ but things change when he scores an exclusive interview with a terrorist who has blown up Mumbai's Sea Link bridge.

Dhamaka is a thriller but it starts on a sweet note. Soon, the tone changes as Arjun gets the call from the mysterious caller. The first half will give you no reason to complain as the makers neatly explain the setting, the dynamics between the various characters and why Arjun has got demoted. The way Arjun uses his divorce papers to make notes is quite assuming and shows that the director has tried to make the product stand out.

Puneet Sharma and Ram Madhvani's screenplay is impressive and ensures that audiences remain glued to their seats. However, some of the developments in the second half are not convincing. Even the finale is difficult to digest.

Dhamaka scores when it comes to the performances. Kartik Aaryan is known for comic and light-hearted roles but here; he steps into altogether new territory and comes out with flying colours.

Talking about the music, the film featured only one song titled "Khoya Paaya" which was sung by Amit Trivedi and Delraaz Bunshah and written by Puneet Sharma. A promotional video song of the track, shot by Ravi Varman and directed by Bejoy Nambiar, The female version by Jasleen Royal is also hard-hitting. 'Kasoor' is sweet and has the trademark Prateek Kuhad stamp.

Anupama Chopra on the website Film Companion wrote, "Dhamaka isn't a bad film but doesn't match Ram Madhvani Previous work. The scenario is too outlandish and the writing, too ordinary."

On the whole, Dhamaka is an engaging movie but it lacks in its second half. Dhamaka is streaming on Netflix India.