As soon as Disha Patani new bikini photo was shared by the actress she started trending on Twitter with fans praising her boldness. 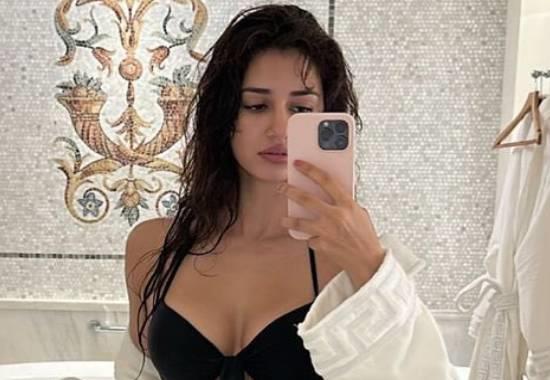 Bollywood actress Disha Patani on Tuesday took the internet by storm after she uploaded her new bikini photo on her social media. Affectionately called as 'National Crush of India' by her fans, Disha Patani took to her Instagram and shared her mirror bikini selfie. As soon as Disha Patani new bikini photo was shared by the actress she started trending on Twitter with fans praising her boldness. Not only this, fans bombarded the actress' comment section after Disha Patani latest bikini photos started spreading like a wildfire. The Ek Villain Returns actress has been grabbing the headlines these days due to her dating history. The actress has reportedly broken up with her rumoured boyfriend Tiger Shroff. Not only this, her name is also connected with one of her model friends Alex with whom she has been spotted multiple times in Mumbai.

Coming to Disha Patani black bikini mirror selfie pic, the actress share the post with a quirky caption, "Eat your carbs". In the picture, Disha Patani can be seen donning a black bikini and taking her selfie in the bathroom. Furthermore, the actress can be seen wearing a bathrobe in order to enhance her boldness. After Disha shared her photo, Tiger Shroff's sister Krishna commented on her post saying, "Yes, Ma’am" on her carbs advice.

Coming to the work front, Disha will be next seen in Suriya's upcoming film, dubbed Suriya42. The 3D film, directed by Siva, is being designed as a pan-India project. Furthermore, it was recently reported that Disha was removed from Ekta Kapoor’s production KTina due to alleged 'unprofessionalism'. A source close to the production told Bollywood Hungama that Disha had attended multiple pre-production meetings in 2019, but everything was put on hold during the pandemic and lockdowns.

She's on a mission to ruin the NNN challenge of Men. 🥵🙌🔥#DishaPatani pic.twitter.com/lqUnWNwmbY