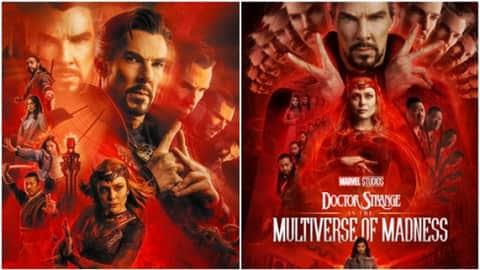 Film: Doctor Strange in the Multiverse of Madness
Director: Sam Raimi
Major Star Cast: Benedict Cumberbatch, Elizabeth Olsen, Benedict Wong, Xochitl Gomez and Rachel McAdams
Release: May 6 (Theatres)
What is the story: The story of 'Doctor Strange in the Multiverse of Madness' revolves around America Chavez (Xochitl Gomez), who has the power to travel in the Multiverse. America Chavez meets Doctor Strange (Benedict Cumberbatch) when she arrives in his universe to save her life.
As the story progresses, it is revealed that Wanda Vision (Elizabeth Olsen) has become the Scarlet Witch, who seeks the power of America, so that she can live in the universe where her children are with her. Doctor Strange then sets out to save America, and Wong (Benedict Wong) also comes forward to help him.
Can Strange defeat Scarlet Witch by saving America? You have to watch the movie to know and understand what happens to Strange in this journey of his and how the multiverse puzzle gets complicated even after being solved.
What's special: 'Doctor Strange in the Multiverse of Madness' has a lot of action, which can give you a horror feel at times. On the other hand, Marvel Studios' films in VFX have always been ahead of time and once again with 'Doctor Strange 2', the makers have confirmed this.
There are many parts of the film, where you will be compelled to think that how can this even be thought, which is being shown to us on the screen. The most important thing about the film is that from beginning to end, the film keeps you hooked and nowhere do you feel that something is missing or what is the need for this part.
It will also be very interesting to see Charles Xavier, Captain Marvel, Black Bolt and Fantastic Four etc. in the film and this gives a hint that its collaboration will also be seen in the coming times. At the same time, the presence of not one or two but four Doctor Strange in the film will also excite you.
Also Read: Doctor Strange 2 Leak: Benedict Cumberbatch's movie 'leaked' on Torrents ahead of release; Watch
The Casio music fight scene of the film is quite different and you will definitely like this musical fight too. At the same time, where MCU fans used to say 'I love you 3000', then maybe after this film the trend of saying 'I love you in every universe', has already started appearing on social media.
Viewers must note: Although everyone knows that all the movies of MCU World are connected, in such a situation if you have not seen the old movies, then you will not understand many parts of the film. On the other hand, to understand the film better, it would be better if you have seen Marvel's web series 'Wanda Vision', 'Loki' and 'What If'.
The film is the second part of Doctor Strange, but the film has progressed manifold from its first part, which has been seen gradually in the rest of the films. Along with this, let us also tell you that in the past, there were reports that Tom Cruise will be seen as Iron Man in this film, and then those fans will only feel disappointed.
Watch or not: For Hollywood lovers, there is a lot in the film that they will love very much, while if you are a Marvel fan then you can not skip this film at any cost.
There are not one but two post-credit scenes in the film. While you will be excited for the next part of the film after the first post-credit scene, you will not stop laughing after watching the second post-credit scene.