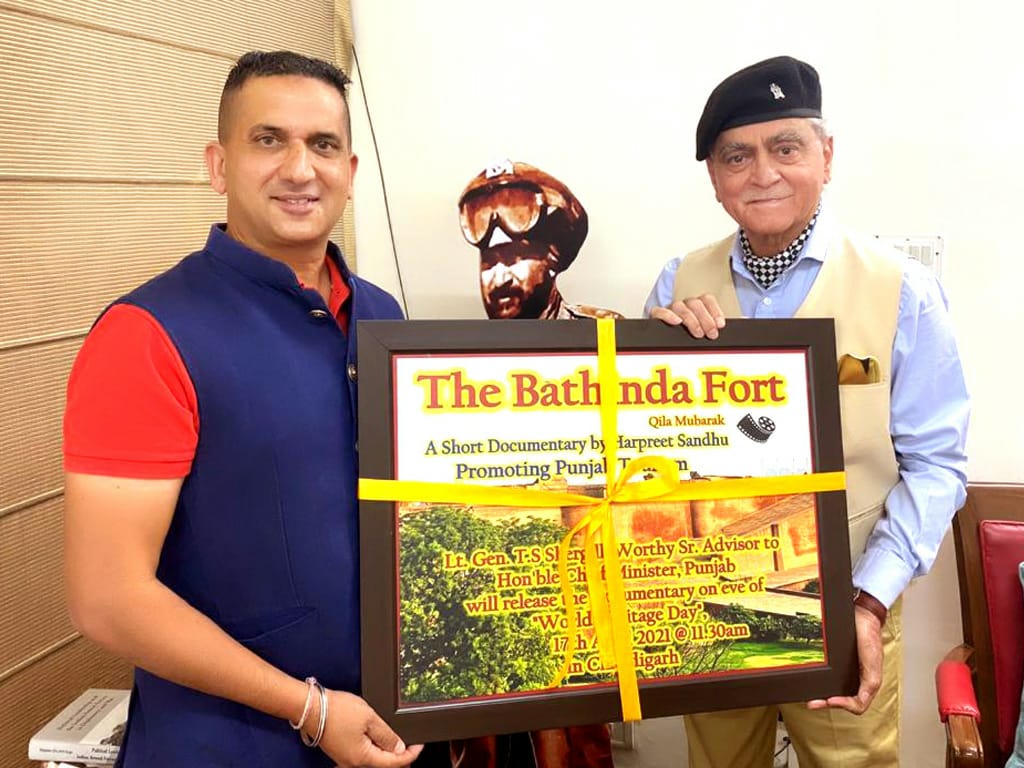 Chandigarh, April 17:With a view to inspire the younger generation of Punjab about the glorious historical and cultural heritage of the State guided by the vision of Chief Minister Captain Amarinder Singh, Senior Advisor to Chief Minister, Punjab Lt. Gen. T.S Shergill, on Saturday released the Documentary Film titled, 'The Bathinda Fort' worldwide in the presence of Director of the film Harpreet Sandhu.

On the occasion, Senior Advisor said that the documentary Film depicts Bathinda Fort, the magnificent  historic monument of National importance and the oldest surviving fort in India built around Sixth century.

Pointing out further, he said that this fort has historical relevance as it is related to the first women Empress of India Razia Sultan, who was kept as a prisoner in this fort, later she escaped by jumping from a balcony. "This three storied structure Fort has been designed purely in Mughal design and is worth paying a visit", said Lt Gen. Shergill adding this Fort is also known as Govindgarh Fort, having a historical relevance with Tenth Sikh Guru, Guru Gobind Singh, who visited this fort in the year 1705.

Lt. Gen T.S Shergill, after watching the preview of documentary film, urged people of Punjab to must watch this beautifully prepared documentary showcasing the glimpse of this Heritage Site of Punjab and said that, this documentary will definitely help in boosting Punjab tourism as most of people are still unaware of this heritage site in Bathinda.

Lauding the dedicated efforts of Director Harpreet Sandhu, Lt. Gen. Shergill said that it is very heartening to see the legal luminary being passionate about helping Punjab Government in promoting history and culture of the State thus inspiring the youth to get connect with their roots.

The Director of the documentary Harpreet Sandhu said that thanked the Chief Minister and Lt. Gen. T.S. Shergill for encouraging him to follow his passion to promote heritage and cultural grandeur of Punjab for the sake of posterity.