Former US President Donald Trump who was removed from Twitter for spreading false information was in touch with Elon Musk and silently encouraged him to the social networking giant. 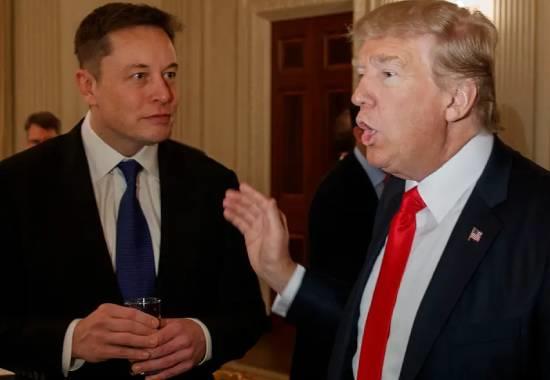 Tesla CEO Elon Musk is yet again in the spotlight over his Twitter takeover after an American leading publication New York Post revealed that former US President Donald Trump encouraged the billionaire to buy the social networking giant. As per reports, former US President Donald Trump who was removed from Twitter for spreading false information was in touch with Elon Musk and silently encouraged him to the social networking giant.
Donald Trump Elon Musk Twitter takeover report surfaced after, Devin Nunes, a former House GOP lawmaker who is CEO of Trump Media & Technology Group in an appearance on Fox Business Network revealed that the former US President 'encouraged' Elon Musk’s takeover of social media giant Twitter ahead of the $44 billion deal.
"President Trump, basically before Elon Musk bought it, actually said to go and buy it because the goal of our company is really to build a community where people are in a family-friendly, safe environment," Devin Nunes had said.
Elon Musk refutes Donald Trump's encouragement to buy Twitter
Also Read: Elon Musk may take over as temporary CEO of Twitter
Now, Elon Musk who is quite active on social media, especially on Twitter addressed the report and denied it by calling it a 'fake'. Furthermore, Musk stated that he never communicated with Donald Trump and he is keen to remain on his own founded social media i.e. Truth Social.
"This is false. I’ve had no communication, directly or indirectly, with Trump, who has publicly stated that he will be exclusively on Truth Social," wrote Elon Musk on his Twitter handle.

Elon Musk to take charge as temporary CEO of Twiiter
Elon Musk is likely to take over as a temporary CEO of Twitter when the $44 billion takeover deal is through, the media reported on Thursday.  According to a CNBC report, Musk has detailed the plans in presentations to possible funders for the takeover. Twitter CEO Parag Agrawal has been leading the micro-blogging platform since November, after taking over the helm from Jack Dorsey.
CNBC's David Faber, who first broke the news about Dorsey stepping down as Twitter CEO, has now claimed that Musk will be the temporary CEO at the company for a few months.