Draupadi Murmu: Biography, early life, marriage and the story of her dowry 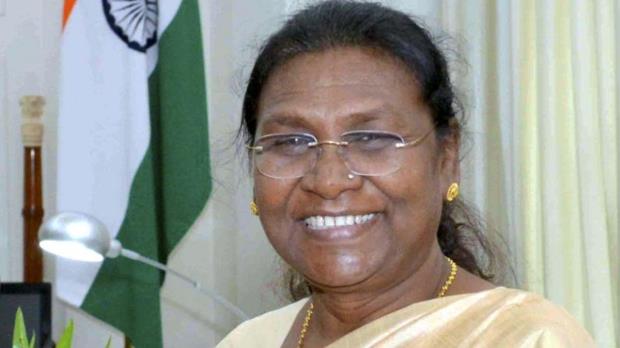 Around 300 Kilometres from the capital city of Bhubaneswar, there is a village named ‘Paharpur’, the village where now India’s President came for the first time as a bride some 42 years back. The clean road from the entrance takes you inside the tribal village in a completely sluggish state. The legends of Draupadi Murmu’s love marriage are still afresh among the villagers. Now that she is all set to take oath as India’s new President the footfall in this village has increased. But what was the story of her marriage? An insightful details to it.
On the question of whether he knows Draupadi Murmu or not? An old man Laxman Basi bent from the waist with all enthusiasm and said, “Why won’t I know her, we had gone to her home for the marriage-related purpose with Shyam Charan (Shyam Murmu, late husband of Draupadi Murmu).”
He smiled a bit and continued saying, “It was a love marriage. A week before we went to Draupadi’s home Shyam told me about Draupadi. It is some 42 years old story, she was Draupadi Tudu, before the marriage, and later Murmu was added to her name.”
How it all started?
Draupadi was pursuing her Graduation in Bhubaneswar. She was a topper since the beginning. She was the only girl during those days from her village Uparvada (her maternal village) who had gone to Bhubaneswar to study. She studied in the local Tribal Residential School from 1969 to 1973 and later got admitted to Rama Devi Women’s College in Bhubaneswar. Draupadi and Shyam first met each other in Bhubaneswar. The two fell in love with each other and decided to get married. It was in 1980 when Shyam reached Draupadi’s village to meet her parents for the marriage.
Shyam stayed for three days in Draupadi’s village:
One of Draupadi’s relatives said, “When her father Biranchi Narayan Tudu got to know about this relation, he was fuming over Draupadi and was not happy about this relation. But Shyam was also undeterred and decided he will only leave once the marriage gets finalized. Shyam had come to the village with two of his uncles and a few more friends. They all stayed in Draupadi’s village for 3-4 days. On the other hand, Draupadi also made up her mind about getting married to Shyam. But at last, everything got settled, it is rightly said, ‘Good things take time’ finally Draupadi’s father agreed to their relationship.” It is a custom in the Tribal community that the family from the groom’s side will go to the bride’s home for the marriage.
Draupadi Murmu’s aunt, Jamuna Tudu added to the story in her santhali dialect, “It was decided that an ox, a cow, and 16 sets of clothes will be given in the dowry, to which Draupadi’s family agreed”. Both Draupadi and Shyam belong to Santhal Community. The custom of this community says that the dowry is given to the bride’s family by the groom’s side. It is mutually decided by both the families. Days later do that incident both got married Draupadi Murmu got married to Shyam in the year 1980, but the exact date is not known to any member of the village neither in ‘Uparvada’ nor in ‘Paharpur’
A dedicated school in the memory of family:
In the middle of ‘Paharpur’ village, there is a school named Shyam, Laxman, Shipun Higher Primary Residential School. The initials of the school are named after Draupadi’s husband Shyam and their sons Laxman and Shipun, all three of them died in a span of 4 years, which left Draupadi all alone. After the demise of her husband in 2014, she constructed a school on the land two years later in 2016 on the land where she used to live with her family once.
Every year on the death anniversary of her sons and husband, Draupadi pays a visit to the school, one girl child studying in that school said on the occasion, “We are proud that she is going to be the President of our country. After her victory, we will celebrate the moment with great pomp and show in the school as well as in the entire village.”
The entire village is celebrating the occasion after Draupadi Murmu was named the presidential candidate.
This Paharpur village is home to three Tribal communities Ho, Munda, and Santhal. With 100-125 homes the village has 400 voters, with the official declaration of Draupadi Murmu as the new President anytime soon, the celebration in the recent past of the village presumably will be the grandest.