This scam is on for months, where the fraudsters imposter as the personnel from the local electricity board, asking users to make a call in order to facilitate them Author : Tushar Singh 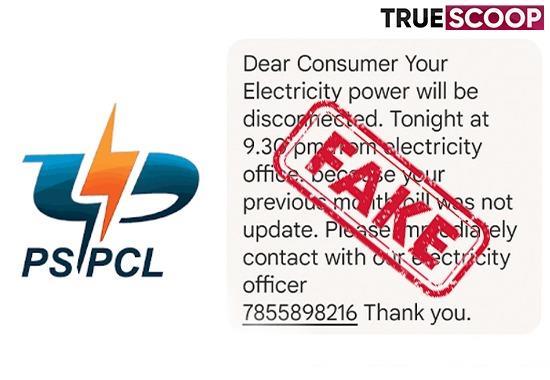 A fake message that has been making rounds for months now is resurfacing massively yet again asking random users to pay their outstanding electricity bills. A message is being sent on the registered Whatsapp numbers and through SMS asking users to clear their electricity bills or else the service will be terminated.

A text message that read “Dear Customer, Your Electricity Power will disconnect at 9:30 pm as your last month’s bill wasn't updated Call us at 9707214742 immediately Thank you,” is being widely circulated among people not just in Punjab but in different pockets of the country as well.

When our team consulted the spokesperson of the PSPCL they outrightly denied any such messages from the corporation and appealed to people to beware of these frauds.

He said, “Yes, it has also come to our notice about the message making rounds and is being sent to people on WhatsApp and through text messages, which is completely fake. PSPCL doesn’t endorse backs the responsibility of any crime through this. It is our humble appeal to each of you to be on alert against any such message and inform the police immediately.”

The scam is on the line of the massive Phishing nexus that is operative looting innocent people and has Jamtara as the epicenter of these cases on which a marvelous web series has also been dedicated on Netflix.

This scam is on for months, where the fraudsters have found a different mode of trap in their wide nexus of ‘Phishing’ where they imposter as the personnel from the local electricity board, asking users to make a call in order to facilitate them.

When the users make calls they are asked to download an application through which they befool the innocents and take away their hard-earned money. Moreover, the catch that remains is the change in the phone numbers that flash in the messages sent to the users.

However, the magnitude of the scam that has been done through this is not known as of yet. A lot of cases have come to the notice of the Police, where Police have launched an investigation into the matter to nab the nexus involved in the case.

PSPCL or any other electricity board does not share messages in these forms. If you receive any such message kindly report to your near police station and aware your family and relatives about the same. Don't respond to such messages it might land you in serious trouble like others in the case of Jamtara's scam.