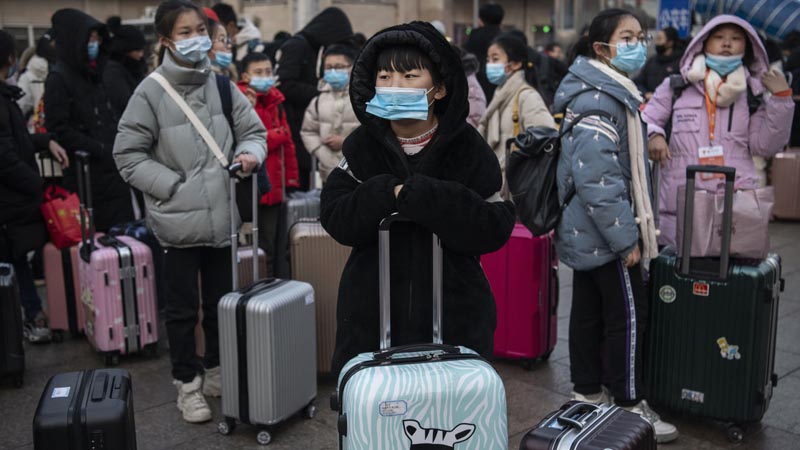 An outbreak of a new coronavirus that began in the central Chinese city of Wuhan has killed 17 and infected nearly 600 people in the entire world.

China has withheld all public transport, including flights in and out of Wuhan, the epicentre of the coronavirus as the confirmed cases climbed to 571 mostly from the city. Global health authorities fear the transmission rate will accelerate as hundreds of millions of Chinese travel at home and abroad during the Lunar New Year holiday.

But how did this deadly virus got its name?

When observed under a microscope, coronaviruses appear to have a crown-like structure. And in Latin, word 'corona' means 'crown'. This is why the virus is referred to as coronavirus.

The coronavirus family has many types that affect people. Some cause the common cold while others originating in bats, camels and other animals have evolved into more severe illnesses such as SARS severe acute respiratory syndrome or MERS Middle East respiratory syndrome.

SYMPTOMS OF CORONAVIRUS: A runny nose, headache, cough and fever

As per the US Centers for Disease Control and Prevention, shortness of breath, chills and body aches are associated with more dangerous kinds of coronavirus. In serious cases, the virus can cause pneumonia.

Death due to the new coronavirus outbreak in China has increased to 17 with confirmed infection cases sharply rising to 571, even as the cases of the deadly pneumonia were reported from US, Hong Kong, Macao and Mexico.

Thailand reported four cases, and South Korea, Japan, Taiwan and the United States one each. Patients in these cases were either residents of Wuhan or recent visitors to the city.

IS IT TRACED YET?

Chinese authorities are trying to determine the origin of the virus, which they say came from a market in Wuhan where wildlife was traded illegally.

The World Health Organization (WHO) says an animal appears most likely to be the primary source.

Some experts say the virus may not be as deadly as other coronaviruses such as Severe Acute Respiratory Syndrome (SARS), which killed nearly 800 people during a 2002-2003 outbreak also originating from China.

Steps Taken To Curb: There is no vaccine for the new virus, which China says is mutating.

Also Read: Coronavirus kills 9 in 440 cases: WHO Emergency meeting begins, UN body to decide if it's a global crisis

Chinese authorities shut down all urban transport networks and suspended outgoing flights from Wuhan as of 0200 GMT Thursday, urged residents to not leave the city and advised against travel into the city.

They have also stepped up monitoring and disinfection efforts ahead of the Lunar New Year break that starts on Jan. 24.
Airports in the United States and Britain, as well as many Asian countries, including Japan, Thailand, Singapore and South Korea, stepped up screening of passengers from Wuhan.
Russia strengthened sanitary and quarantine controls at entry points.

Taiwan advised people not to visit Wuhan unless absolutely necessary and suspended Wuhan tourist groups from visiting the island. Britain, Singapore and Australia also have advised against all but essential travel to the city.

The WHO sent directives to hospitals around the world on infection prevention and control. The U.N. body will decide on Thursday whether to declare the outbreak a global emergency.
Hong Kong rail operator MTR Corp Ltd said on Thursday it would suspend sales of high-speed tickets to and from China's Wuhan city, the source of an outbreak of a new flu-like virus. Train services between Hong Kong and Wuhan would remain normal, however, the operator said, without elaborating.

Public and MNC Reaction On The Outbreak

The WHO has not recommend trade or travel restrictions yet, some Chinese travel booking platforms and airlines have offered free cancellations for Wuhan trips.

Shanghai's Disneyland will waive some rescheduling fees for customers who change travel plans. Hong Kong's Cathay Pacific Airways Ltd will let passengers to Wuhan change or cancel flights without charge through February 15 and permit cabin crew to wear masks on flights to the mainland

Asian shares and US stocks fell on Thursday as investors remained anxious about the spread of a new flu-like virus in China just as millions prepared to travel for the Lunar New Year.

Oil futures were slashed to seven-week lows as the contagion was expected to hit airline travel.
MSCI's broadest index of Asia-Pacific shares outside Japan fell 0.45%.
Blue-chip Chinese shares fall to 0.91%. Australian shares were down 0.57%, while Japan's Nikkei stock index was down to 0.6%.
The Chinese yuan fell toward a two-week low, while safe-havens such as the Japanese yen, gold, and U.S. Treasuries rose.

There is a test to identify the virus, but no vaccine to prevent an infection. Patients with the virus have been secluded in hospitals or homes to prevent spreading it. The symptoms are treated with pain and fever medication, and people are advised to drink plenty of liquids and rest while they recover.