As Punjab Assembly elections are around the corner, the political parties and leaders will make every effort to woo voters of all communities. 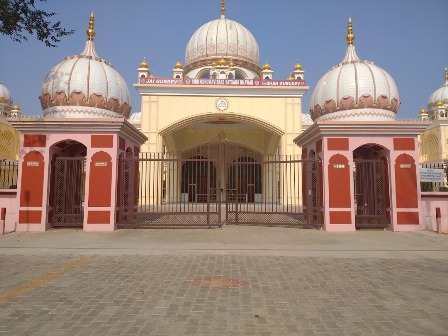 After being elevated as Punjab Congress Chief even Navjot Sidhu visited Dera Ballan and met its head Sant Niranjan Dass. Sidhu then also addressed a gathering at the dera and said that the blessings of saints were important to create a “new Punjab”.

As Punjab Assembly elections are around the corner, the political parties and leaders will make every effort to woo voters of all communities. There are a large number of deras in Punjab, which has followers from across the state, outside state and among NRIs.

One such popular dera in Punjab is Dera Sachkhand Ballan in Jalandhar. Based on the teachings of Ravidass, Dera Sachkhand is a powerful Ravidassias religious temple that has been prospering since the 1980s.

The dera was established in the twenty-first century and it is the Mecca of the Ravidassia Dalits, who are the predominant in the Doaba region.

The dera's political weight stems from the sheer force of numbers. Because Dalits make up 32% of Punjab's population- the largest percentage in any state, practically all political parties make it a point to meet with dera heads before the elections to secure their support.

Over a third of Punjab's population (12 percent) identify as Ravidassias- followers of Ravidass, a 15th-century Bhakti poet-saint who is primarily treasured as a Dalit icon.

The majority of Dalit or Scheduled Castes (SC) people live in the Doaba region, which has an SC population of roughly 45 percent.

The region sends 23 legislators to the 117-member state assembly. Dera has direct influence over at least 19 seats and the Ravidassia community's vote share ranges from 20% to 50%.

Dera Ballan had a non-Ravidassia Dalit following as well, however, this has declined since it became a separate religion. Dera supporters are split between the Congress and the Bahujan Samaj Party (BSP).

Even though dera heads claim not influencing their followers’ votes, their disciples do discuss which political party best serves their needs. In addition, dera devotees are incredibly united. As a result, they reach a point of agreement. This is why politicians constantly visit deras and show a keen interest in facilitating them.

New CM and its effect on Dalit vote bank

Last time, when Channi visited Ballan along with PPCC president Navjot Singh Sidhu, he had sought 101 acres of land for the dera. If he fulfills his promise of land for dera, this will have a significant effect on the Dalit vote bank in upcoming Punjab elections.

On the other hand, to appease Hindu and Jatt Sikh voters in the state, Congress has made Sukhjinder Singh Randhawa and OP Soni Deputy CMs.