Amid the deepening political crisis in Pakistan, the intelligence letter shared by Prime Minister Imran Khan to the media has now been called false by the US. 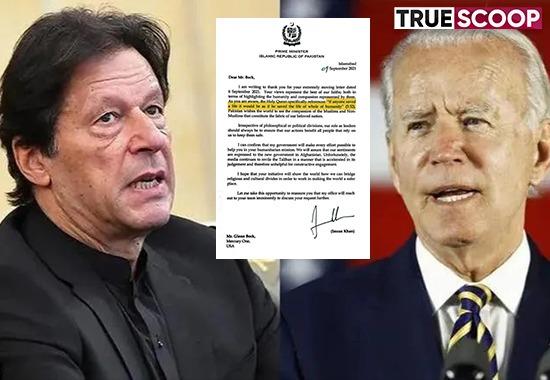 On the secret letter bomb, the spokesperson of the US State Department, while answering the questions of the journalists, clearly said that America has no hand in this. Imran Khan is making false allegations.
Amid the deepening political crisis in Pakistan, the intelligence letter shared by Prime Minister Imran Khan to the media has now been called false by the US.
The US State Department spokesman, while answering the questions of the journalists, clearly said that America has no hand in this. Imran Khan is making false allegations.
The US spokesperson said that no such letter has been given from our side to any Pakistani official. The spokesperson also said that it has no interference in the political crisis that has emerged in Pakistan. No US agency has any hand in this.
PM Imran had accused of a Foreign Conspiracy
PM Imran had played the last trick of a secret letter bomb to save the government. He had alleged that foreign forces had hatched a conspiracy against him to topple the Pakistan Tehreek-e-Insaf (PTI) government.
Imran presented a threatening letter related to this in front of the media on Wednesday. With this, he termed this document as completely genuine. But now America has called it false.
Read what was written in the threatening letter
According to Pakistani journalists, Imran Khan showed this letter to the journalists from a distance and only its superficial things were kept in front of the media.
In a conversation with ARY News, one of the journalists to whom this letter was shown said that it is clear that the developments taking place in Pakistan through the no-confidence motion were told only on March 7.
It was said in the letter that if the no-confidence motion becomes successful and the Imran government falls, then Pakistan's problems at the international level will be reduced.
If this proposal fails, then Pakistan will have to pressurize it to agree.
According to journalists, The language of this letter was threatening and the Imran government put it in front of the cabinet meeting.
Journalist Arshad Sharif, quoting sources, claimed that five to six ministers started crying when the letter was placed before the cabinet.
The Prime Minister himself did not name any country or officer during the discussion. But he did say that the letter was shared with Army Chief General Qamar Javed Bajwa and ISI chief Faiz Hameed. The letter also mentioned Pakistan's stand on the Russo-Ukraine war.