Explained: Why Bhagwant Mann may fail to get 'full' capital despite Punjab staking claim on Chandigarh

The centralization of Chandigarh which is the capital of two states Punjab and Chandigarh have fumed the newly-formed Bhagwant Mann's administration. 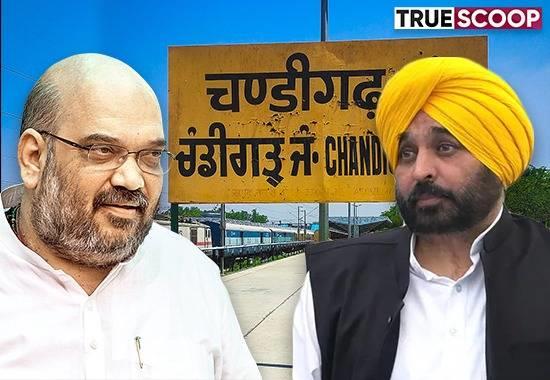 The Centre vs State has been brewing up yet again as Punjab State Government has lodged its strong protest over the Union Government of India's notification on Chandigarh.  Recently the Central Government e notified Central Service Rules for employees in the Union Territory (Chandigarh) instead of the Punjab Service Rules. Before this, the Centre had amended rules for appointments to the Bhakra Beas Management Board (BBMB) — recruitments can now be done from anywhere in India, instead of just Punjab and Haryana.
The centralization of the Union Territory - Chandigarh which is the capital of two states Punjab and Chandigarh have fumed the newly-formed Bhagwant Mann's administration. The Centre's notification on Central Services Rule sparked massive outrage in the Punjab State Government and as a result, they passed a unanimous resolution reiterating the state’s claim on Chandigarh.
Now, to understand whether Punjab has an actual stake in Chandigarh or not, readers have to take a dip in the ocean of the past.
When and how did Chandigarh become the capital of Punjab?
After participation, Punjab was divided into two halves. One fell in the lap of Pakistan and the other came in India. Following that partition, Shimla was made the temporary capital of India's Punjab. However, then Indian PM Jawaharlal Nehru wanted a modern city to replace Lahore as Punjab's capital and then the idea of Chandigarh was conceived. In 1948, the Punjab government in consultation with the Centre chose the foothills of the Shivaliks as the site of the new capital. Twenty-two villages in Kharar were acquired for the city, and the government compensated their displaced residents. The capital was officially moved from Shimla to Chandigarh on September 21, 1953. President Rajendra Prasad inaugurated the new capital on October 7, 1953. Until Haryana was born, Chandigarh remained the capital of Punjab. Therefore, it can be said that Punjab has every right to stake claims on Chandigarh.
When did Chandigarh become a Union Territory?
The most planned city of India 'Chandigarh' became a union territory when the Punjab Reorganisation Act of 1966 carved out the new state of Haryana from undivided Punjab. Under this, the hill territory of Punjab was transferred to Himachal Pradesh. However, under the  Capital of Punjab (Development and Regulation) Act, 1952, Chandigarh remained the capital of Punjab and also Haryana. With two states sharing a single capital, the property were divided in the ratio of 60:40.
What do Punjab CM Bhagwant Mann and AAP leaders have to say about Chandigarh?
As per the Indian Express report, the Punjab Government is citing history as their logic to prove their point and make their demands lawful. AAP MLA Aman Arora has stated that whenever a state has been carved out off its parents state in the past, the capital city has stayed with the parent state. For example, when Maharashtra was reorganized and Gujarat was born, Mumbai remained the capital of Maharashtra. Similarly in the case of Uttarakhand-UP, Jharkhand-Bihar, and Chhattisgarh-Madhya Pradesh. Notably, the reorganization period for any newly-formed state remains 10 years, however, the reorganization period continues even after five decades in Punjab.
Can Bhagwant Mann's resolution resolve the grand old issue of Chandigarh?
Now, the question arises whether Punjab CM Bhagwant Mann can play a pivotal role to resolve the issue of Chandigarh and get Punjab's 'full' capital? The relationship between the AAP and the ruling BJP suggests a big no. Recently, Union Home Minister Amit Shah played a pivotal role to resovly a historic territorial dispute between Assam and Meghalaya. Following that few might think that Union Home Minister Amit Shah might resolve the 'Chandigarh' issue as well. However, with AAP emerging to be a major opposition in the absence of Congress' dominance, it is highly unlikely that CM Bhagwant Mann's resolution can play any part.
Haryana CM Khatter's remark on CM Bhagwant Mann's resolution
Haryana Chief Minister Manohar Lal Khatter on Friday called Punjab's resolution on Chandigarh as meaningless. "The Punjab government’s one-sided resolution has no meaning. …This is not only a subject of Punjab, it is a subject of Haryana and even…Himachal Pradesh… Chandigarh is the capital of Punjab and Haryana…aur dono ki hi rahegi (and it will remain the capital of both)," Khatter said.
Notably, in 2018, Haryana CM Manohar Lal Khattar had suggested that a special body should be set up for the development of Chandigarh. But the idea was rejected by then Punjab Chief Minister Capt Amarinder Singh, who said Chandigarh indisputably belonged to Punjab. Haryana has been demanding a separate High Court, and has passed a resolution in the Assembly demanding 20 rooms in the Vidhan Sabha complex that have been in Punjab’s possession.