Explained: Why is Sri Lanka in Economic Crisis? 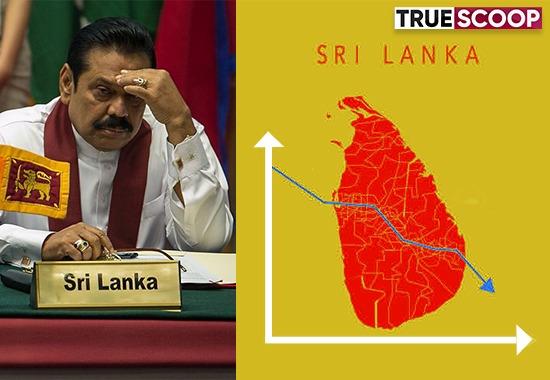 President Gotabaya Rajapaksa declared a state of emergency on Friday amid deepening economic problems in Sri Lanka.
It has been said in the order that this decision has been taken for the security of the country and maintenance of the supply of essential services.
After this, security has been increased across the country. On Saturday, shops were opened in the capital Colombo amid the deployment of the army, so that people could buy essential items.
Here, the oil tanker that India had sent to help Sri Lanka battle the fuel crisis, has reached Sri Lanka on Saturday. Fuel distribution will be started from this by evening.
After this, people struggling with the fuel crisis are expected to get relief. India has given a credit line of 1 billion dollars to Sri Lanka. Under this, a ship carrying 40,000 tonnes of diesel has reached Sri Lanka.
After the declaration of emergency, the army can arrest suspects without trial and keep them in custody for a long time.
11 parties supporting Rajapaksa's government have demanded the dissolution of the cabinet and the formation of an interim government. They say that the recent cabinet has proved to be unsuccessful in controlling the rising inflation.
Earlier on Thursday, thousands of people protested and pelted stones outside the residence of President Rajapaksa.
In retaliation, the police resorted to lathi-charge. In this violent confrontation, 10 people including at least 5 policemen were injured. 45 people have been arrested in connection with the violence.
There has been a shortage of fuel and gas in the country of Sri Lanka, which is facing a financial crisis. People have to stand in line for many hours for petrol and diesel.
The educational board has run out of paper and ink, after which the exams have been postponed indefinitely. There was no diesel in Sri Lanka on Thursday evening, due to which the transport system came to a standstill.
Along with this, 22 million people in the country also had to face power cuts for a long time. Situation is such that milk has become more expensive than gold for the people here. People have to deal with many problems even for two times of bread.

Effects on Tourism
The tourism sector has a big role in the economy of Sri Lanka, which is in debt due to the stagnation of tourism, but it has already come to a standstill due to the impact of Corona. Tourism is the third-largest source of foreign currency for the country.
Due to its weakening, the foreign exchange reserves of the country have become almost empty. About 5 lakh Sri Lankans are directly dependent on tourism, while 20 lakh are indirectly connected with it.
Tourism contributes more than 10% to Sri Lanka's GDP. Sri Lanka gets about $ 5 billion (about Rs 37 thousand crores) of foreign currency annually from tourism.
China's debt-ridden Sri Lanka
The country has to repay the domestic and foreign debt of $ 7.3 billion (about 54,000 crore Indian rupees) in the next 12 months. China accounts for about 68% of the total debt.
Sri Lanka has to pay 5 billion dollars (about 37 thousand crore rupees) to China. Last year, it had taken an additional $ 1 billion (about 7 thousand crores) loan from China to help deal with the serious financial crisis, which is being paid in instalments.
One Family Rule
Sri Lankan politics has been revolving around a single family for the last two decades. The President of the country is Gotabaya Rajapaksa (72).
His elder brother Mahinda Rajapaksa (75) is the Prime Minister. He also holds the Ministry of Urban Development.
He has also been the President of the country. Chamal Rajapaksa, the eldest brother of the Rajapaksa family, is the Home Minister of Sri Lanka.
At the same time, Basil Rajapaksa is the Finance Minister of Sri Lanka. Mahinda's son Namal Rajapakse is the Sports Minister and the Technology Ministry is also with him.
Chamal Rajapaksa's son Shashendra Rajapakse is the Agriculture Minister of Sri Lanka.
What is the impact of the Sri Lankan crisis on India?
The impact of the economic slowdown in Sri Lanka is now being felt in India as well. Experts believe that more Sri Lankans will now come to India illegally to escape the economic crisis.
More refugees are expected to come to India from Tamil-dominated areas in North Sri Lanka in the coming weeks. It has been claimed in many reports that this number can be up to 2 thousand.