Explainer: Is Sasha Banks' going to be released from WWE soon? Experts believe 'she is next'

As per report offered the Sasha Banks' salute without specification if she was trying to finalize her contract or an expiration. 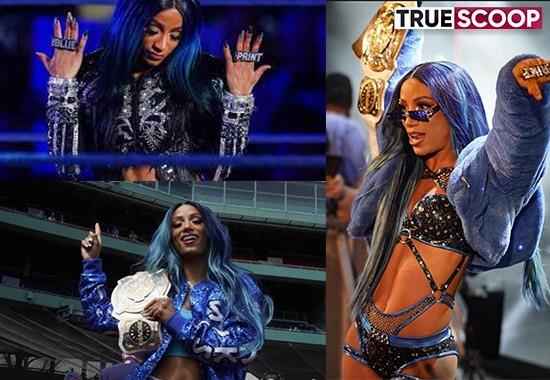 Sasha Banks WWE: On May 16, WWE was involved in a behind-the-scenes controversy when Sasha Banks and Naomi left the venue where that night's Monday Night RAW episode took place. Both superstars had an altercation with the company authorities regarding their creative situation, resulting in a suspension that remains to this day.
Because there are no details regarding respect to the future of ambitious ambitions, various news portals of WWE have been explored, especially with the possibility that Sasha Banks has finalized its contractual relations with WWE. As per report offered the Sasha Banks' salute without specification if she was trying to finalize her contract or an expiration.
On the other hand, the journalist Sean Ross Sapp of Fightful stated that WWE and its talent relations team have not heard anything related to Sasha Banks until Wednesday night. It is important to note that Vince McMahon's company has not reported anything regarding Banks after what happened 30 days ago. On the other hand, no information has been presented about Naomi who was also involved in the aforementioned altercations.
After two years on the independent circuit, Mercedes Varnado signed a contract with WWE at the end of 2012. After three years and a nearly 200-day reign with the NXT Women's Championship, the superstar made her main roster debut alongside Charlotte Flair and Becky Lynch. Sasha Banks is a five-time RAW Women's Champion, a three-time tag team titleholder, and the third WWE Grand Slam Champion.
Know the controversy of Naomi, Sasha Banks & WWE
Last month on Monday Night RAW she was involved in a controversy behind the scenes when Sasha Banks and Naomi left the room where the episode was made. Both superstars had an altercation with WWE authorities regarding their creative situation within the company's women's tag team division.
Also Read: Viral Video: WWE's Charlotte Flair enjoys 'naughty lap dance' from husband Andrade in her wedding; Watch
Her unexpected departure from RAW left a huge hole in the main event. WWE had announced a Six-Pack Challenge between Sasha Banks, Naomi, Asuka, Becky Lynch, Doudrop and Nikki ASH with the winner receiving a title opportunity. As per report, moments ago that this match would have set the stage for a Hell in a Cell tag team match between Sasha and Naomi against Doudrop and Nikki.
According to the news portal, the fight had been scheduled so that both couples faced each other for much of the fight. As previously stated, Naomi was going to take the win pinning Nikki ASH, and not Sasha as various outlets have incorrectly stated. The supposed match between Naomi and Bianca Belair would have received some kind of setback before Hell in a Cell, giving rise to the tag team match in the PLE. Other news portal confirmed that the rivalry was removed from the company's plans after that events.
On the other hand, fans and portals have made conjectures based on the press release published by WWE. In several places, Asuka and Becky Lynch can be pointed out as the supposed competitors that Sasha Banks and Naomi did not want to cross in combat.
However, there was no indication that the tag team champions considered someone "unsafe" until WWE released its statement, implying that the company had softened certain points so as not to explain what happened off-camera.