Post this video, fans have only been showering love at Ranveer Singh for being so modest and replying to racer in most respectful way 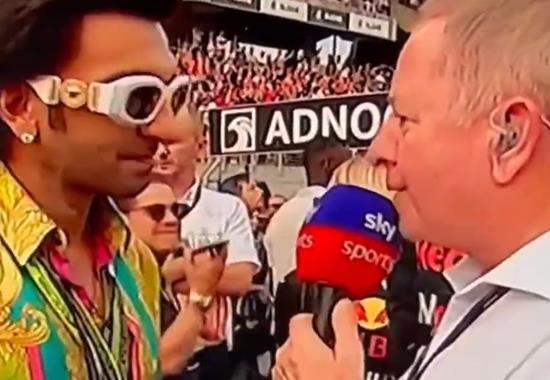 A video from Abu Dhabi has been going viral in which former F1 racer fails to recognize a famous Bollywood star Ranveer Singh and asks him to remind who he is. The reply by great actor to former racer left everyone praising him for the modesty he showed.

The video going viral is from Abu Dhabi Grand Prix in which famous actor Ranveer Singh got to meet other famous personalities from all over the world like Chris Gayle, Ben Stokes, Usain Bolt, etc. During his interaction, Ranveer Singh also got an opportunity to meet former F1 racer Mrtin Brundle and while conversing later told that he does not know about the actor. In response to same Ranveer Singh instead of getting angry over him, managed the situation in the most modest way.

In the video shown, former F1 racer Martic Brundle approached Ranveer Singh and inquired about him. He further added that he has forgotten who the actor is and if later could help him remind. Bollywood actor replied to it saying, “I am a Bollywood Actor from Mumbai, India. I am an entertainer.”

Post this video, fans have only been showering love at Ranveer Singh for being so modest and replying to racer in most respectful way. People applauded saying that this shows how humble, genuine and kind person he is.

Talking about Ranveer Singh, he has many projects coming up. As per information, actor will be seen in Rohit Shetty next and will also be starring with Alia Bhatt in 'Rocky Aur Rani Ki Prem Kahaani. Along with this he will also be playing an important part in Karan Johar’s upcoming ‘Takht.’

F1 veteran & renowned commentator Martin Brundle is asking Ranveer Singh 'who are you' at yesterday's F1 race in Abu Dhabi.