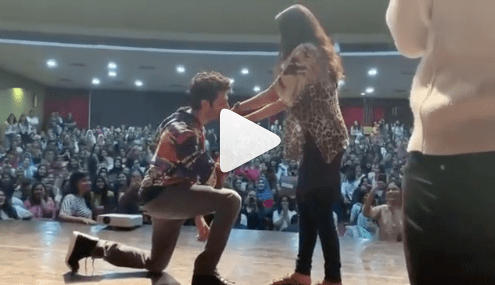 At least, he accomplished the latter before COVID, when public appearances were common and live performances were possible. On Saturday, he posted a video of himself on stage chatting with his followers.

The Instagram video shows him dancing with a girl on stage during a live performance — likely a college gig — in an auditorium. In the backdrop, the song "Photo" from his film Luka Chuppi plays. He gets down on his knees at one point and kisses the girl's hand before hugging her. When the crowd sees Aaryan's action, they go crazy and enthusiastically applaud him.  See video here.

He captioned the video,"Is it called Fanception because I'm a Fan of my Fans? Can keep going forever just for this feeling,"

Also Read: After exit from Dostana 2 and Freddie, Kartik Aaryan dropped from this filmmaker’s movie

Another fan wrote, "@kartikaaryan you are looking handsome in this video and I am in shock to see that video.. lots of love from your biggest fan.’’

Another wrote: "Yarrrrr Hume kb mauka milega." A user wittily quipped: "No but the way id kill to be that girl right there?!!?"

On the work front, the actor is anticipating the release of a handful of films. Kartik will next be seen in "Bhool Bhulaiyaa 2," in which he will co-star with Tabu and Kiara Advani. The film is a sequel to "Bhool Bhulaiyaa," which was released in 2007. He's also working on the film "Dhamaka," which will be released on an OTT platform.