On the one hand, in the midst of the corona epidemic, there is a shortage of beds, medicines, and oxygen in hospitals, on the other hand, the black marketing and frauds of medicines are rising. There have been many reports in the media that the police have uncovered a gang of fake medicines of Coronavirus at many places.

Bollywood actor Farhan Akhtar shared his anger over the whole situation and wrote on his official Twitter account, “seen a news report of people manufacturing and selling fake Covid medication. You have to be a special kind of monster to con people in these dark and desperate times. Shame on you whoever you are!!!”. This tweeting spreading like fire on the internet. 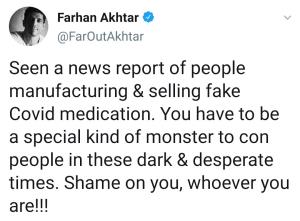 Many fans of the actor and all the social media users are showing agreement with this tweet. Also, they are giving feedback by commenting. Talking about Farhan Akhtar's work front, he will soon be seen in the film ‘Storm’. The film is based on the struggles of a street boxer. Farhan Akhtar's film has been in the news for a long time. The film Storm will be released on May 21 on Amazon Prime Video.

The film will also feature Mrunal Thakur and Paresh Rawal in pivotal roles. Storm was scheduled to release in theaters earlier, but the film's release was halted due to the Corona epidemic and will now be released directly on Amazon Prime Video. Several posters and trailers of the film Storm have been released so far. The audience is so far in a good impression of the trailer.