Find out what Mathias Boe, Taapsee’s Boyfriend says on why she is Dating Him?

And also shared this troll on his Instagram story with the screenshot of the same and mentioning it as, “When you get trolled by a keyboard warrior just agree with him.” 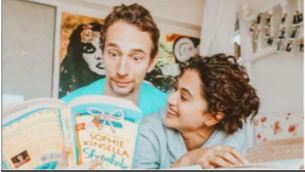 Taapsee Pannu has joined hands with Pranjal Khandhdiya and has now followed the steps of Anushka Sharma, Deepika Padukone, and Priyanka Chopra as she has launched the production house named Outsiders Films on Thursday and she also shared the first movie which she will be doing under the banner is Blurr.

She is not new to trolls and there have been multiple occasions where she has been subjected to social media abuse. However, after sharing the long note on which she told the reason behind opening her own production house, she posted the first look of the film on her Instagram handle. To which she received a lot of comments as well as likes but the most noticeable comment was the comment of her boyfriend, Mathias Boe who wrote “I’ll do a movie for free. Hit Like if you wanna see me in a Bollywood movie.”

Also Read: The controversy queen Kangana Ranaut’s most famous tweet battles were with these celebs

Seeing this hilarious comment from Mathias people left ROFL emojis but among the replies one troll comment was received about Taapsee dating him which said, “I can't believe she is dating you man. She is so precious but it doesn't matter how intelligent a girl is, there comes a time when she can't decide between right and wrong. I think it was that time when you found her.”In response to the troll, Mathias said, “Hi man, yes you are 100% right.”

And also shared this troll on his Instagram story with the screenshot of the same and mentioning it as, “When you get trolled by a keyboard warrior just agree with him.”

Also Read: What happens if Tapsee Pannu’s boyfriend knows about her intimate scenes with Vikrant, Harshvardhan?

Speaking of her movie Blurr, Taapsee said: "'Blurr' is the just kind of script I was waiting for. I'm delighted to be finally turning a producer with this film and with the support of co-producers and team, I am sure it's going to be an enriching journey."

"Collaborating with Ajay is as exciting as it gets as I've seen his work. He is the best to bring the gripping story of Blurr on-screen," she further stated.

"Blurr" is jointly written by Pawan Sony and Ajay Bahl. It will be released soon.