'First Kill' one of the new series additions to the Netflix catalogue that occurred Last Friday, June 10. 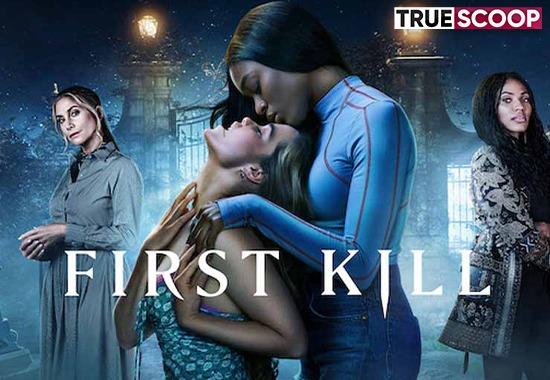 'First Kill' Review: "It's bad, but I'm inside." That is the phrase that the author of these letters wrote to another colleague of this newsroom when sharing her first impressions regarding 'First Kill' one of the new series additions to the Netflix catalogue that occurred Last Friday, June 10.
An expression that has found dozens of counterparts on social networks hours after the premiere of the fiction and that reflects, on the one hand, the reception that the series has had among the public as part of the so-called "guilty pleasures"; and on the other, the chain production model of the streaming platform.
From Romeo and Juliet to Juliette and Calliope
Based on a short story by American fantasy writer Victoria E. Schwab, 'First Kill' tells the story of impossible love between Juliette (Sarah Catherine Hook), a naive and introverted vampire descendant of a prominent and long-running vampire saga of the first-level known as "Legacies"; and Calliope (Imani Lewis), the youngest daughter of a family of monster hunters and members of a worldwide organization of human protectors called "The Guild". They are, by nature and tradition, destined to be enemies, but love, destiny and teenage hormones have other plans for them.
As if it were the Montagues and the Capulets, the Fairmonts and the Burns are two clans at odds over power and supernatural order in Savannah, Georgia. The legendary vampires have managed to camouflage themselves among civil society and find a place in the institutions and the human elite of the town, while the hunters, who have just arrived in the city, have the mission of ending all monsters and restoring peace to the towns. streets. However, the irresistible attraction and undeniable connection between Juliette and Calliope will unleash an unprecedented war between the two families.
'First Kill', created and written by Schwab herself and produced by actress Emma Roberts, takes as a reference the masterpiece of William Shakespeare to offer another look at the most iconic love story in the history of mankind.
Also Read: Squid Game' to return with second season, streamer drops intriguing teaser
This review includes vampires, witches, monsters, lesbian teens, interraciality, female empowerment, matriarchy, and also the classic betrayals, lies, doomed passions, and tortured loves. But far from limiting herself to building solid characters and a story with those wickers, which in themselves are enough concoction. Schwab gets tangled up by adding a network of subplots and secondary characters of very different shades that dirty an idea with potential.
Thus, beyond the lovers, on the Fairmont side, the series is also built on the stories of Margot (Elizabeth Mitchell), a vampire mother with a history of dishonour; Elinor (Gracie Dzienny), Juliette's ambitious and unscrupulous sister; or Oliver (Dylan McNamara), the disowned, tortured and manipulated son who seeks revenge.
On the Burns side, 'First Kill' also focuses on the characters of Talia (Aubin Wise), the protective mother; Apollo (Dominic Goodman), a cocky and selfish hunter; or Theo (Phillip Mullings Jr.), adopted after the death of her mother at the hands of a vampire. All of them, in one way or another, will get in the way of the desires and feelings of the young protagonists.