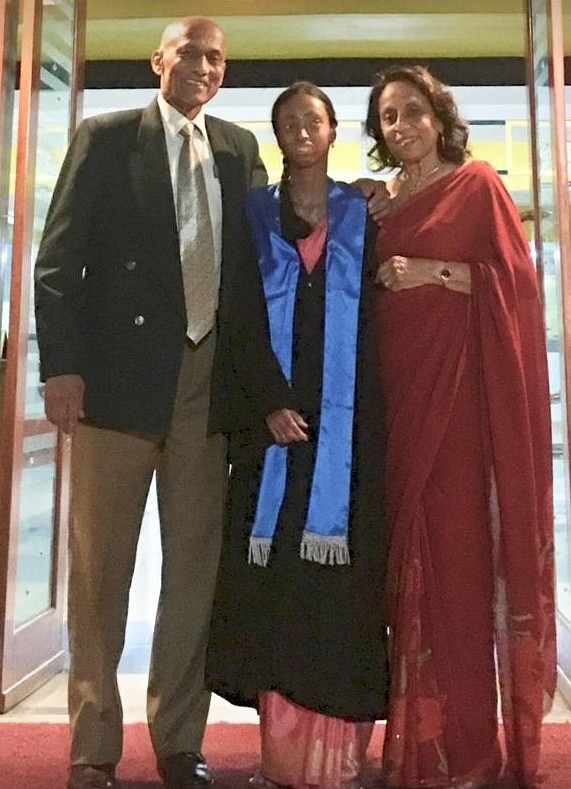 Bengaluru-based couple, Dr Aloma and David have taken care of abandoned children, taking care of them until the children found a family to live in forever.

The couple had three kids of their own, and still they decided to adopt two children.

The couple was informed that a child has been abandoned, and when they rushed to see the child, they found the girl’s skin thick and flaky, with less vision in one of her eyes, no eyelids, and having difficulties drinking.

The couple’s second daughter took no time in announcing to the mother that they had to take the abandoned child home. The mother, though moved at her biological child’s gesture, talked the adoption thoroughly with them.

The girl was named Nisha.

Nisha soon become an inseparable part of the Lobo family. She is the youngest of six children in the family.

As the paperwork for the adoption was initiated, the couple took the weak child home. They were concerned as to if the little angel will make it through the coming days.

The body temperature of Nisha had to be managed at all times, and she had to be carefully covered with creams and oils.

Aloma claims that the biggest challenge during this period of Nisha’a life was finding disposable diapers which would not stick to the child’s body. The child had to be changed every hour.

Nisha had to face stigma of the society as people would remarks about her condition and stay away from her believing her skin condition was contagious.

Local kindergartens and primary schools were giving these parents a hard time because of Nisha’s condition. But not losing hope, they continued looking for schools.

Aloma claims this inclusive school has been instrumental in shaping the childhood and making Nisha the strong girl she is. Aloma attributes much of Nisha’s confidence to the “encouragement of her teachers and peers.”

Nisha’s deep-rooted confidence and acceptance of herself cannot be shaken. When travelling to Singapore, two curious little girls ran up to Nisha and asked if she was getting old very fast for her skin is like this.

The parents began apologising to Nisha but she stood there with a smile, and explained the condition to the girls.

However, Nisha notices that superstitious beliefs in India like “bad karma” and other such claims are used to explain being differently-abled. She feels that a serious need to sensitise people against this stigma is required.

The mother claims emphatically that it was not only an abandoned girl who needed support, but they too needed her. She clarifies adopting a special needs child is not a charity but a mutually fulfilling relationship.

Only a mother can be capable of unconditional love.

Get the latest update about India, check out more about mother unconditional love for her adopted daughter, Breaking news, adoption & Trending news