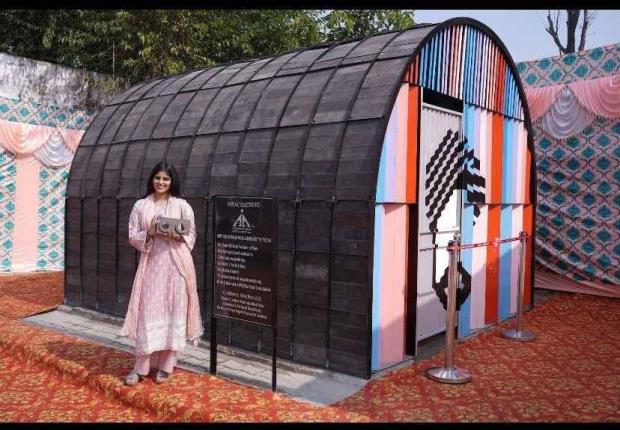 At an age where youngsters still tend to think about what they want to do in life, a girl from Amritsar at the age of 17 worked towards her dream and achieved a great milestone. 12th-grade student of Jayshree Periwal International School, Ruhani Verma is the great mind behind building of India's first 100% recycled communal toilet at the Shri Guru Ram Das Ji International Airport, Amritsar.

Speaking exclusively to TrueScoop, Ruhani Verma revealed that from a very young age she wanted to do something for welfare of society and also follow her passion for being an architect. As her heart was always into sustainability, she worked on a project called ‘SWACHHआलया.’ Talking about the project she revealed that she aimed to build India's first-ever structure using environment-friendly bricks. It was further added by her that the communal toilet’s 30% of bricks are made out of plastic and 70% out of waste, silica.

Being a resident of Amritsar, she decided to start her project from hometown and realized that Amritsar Airport did not have any washrooms in its parking area. This made her feel that it was the best location for this sustainable toilet. “During my journey with this project, I was able to save 4 lakh bags of single-use plastic and recycle them to make bricks, each 1 foot by 4 inches in size. If lined up the plastic over a distance of 150km. I used the idea of interlocking bricks, similar to Lego blocks, to bind the bricks together, as this structure used zero water,” Ruhani Verma added.

Ruhani Verma impressed upon, “India has been suffering from problems of waste production and improper management of waste despite ban on single-use plastic in major cities of country. So, given solving this problem I wish to set-up more communal toilets in rural areas and different parts of country.”