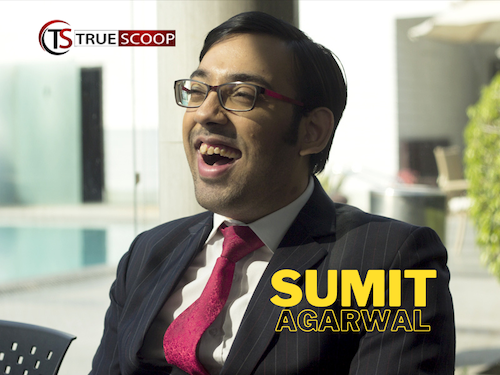 Kolkata, India-based Sumit Agarwal began to doubt his own reality while sitting in class with his classmates. He used to be perplexed as to why others avoided him and why he couldn't participate in sports like basketball like others.

And yet, here he was, fighting his own demons and searching for answers.

Sumit's impairment became clearer to him as he grew older, and he gradually stopped caring about it. He said that he lacked nothing and that he possessed all of the necessary capabilities to fulfil his ambitions. When people said he was "handicapped," he thought they were wrong.

He learned to distinguish between uneducated and arrogant people as a fully developed adult in his thirties. So if the 29-year-old can't find disabled parking in a mall, he doesn't yell at the security officer because he knows the system needs to be improved. He does not, however, hesitate to chastise those who dismiss his impairment.

“I've had four operations and can only move 70 percent of my body. Reduced mobility, muscle spasms, and delayed speech are all things I have to deal with on a regular basis. This, however, does not concern me. People's behaviour and the inefficient implementation of progressive disabled-friendly policies are what really bothers me. The six job rejections I received were the most egregious example. To bring about grassroots change and become an activist, I had to build my own company,” Sumit adds.

He is also a member of Rotary International, the Newspapers Association of India (NAI), the Public Relations Society of India (PRSI), and the International Human Rights Organisation's advisory board (IHRO).

Sumit discusses how his parents aided him in realising his own worth. He believes this is why, despite the stress of being humiliated in school, he was able to establish friends and participate in activities in college. It's also why he went into public relations.


The effect of right parenting

Sumit's parents grew up in a time when having a disability meant being unable to accomplish some things or, even worse, being labelled "defective." There were no regulations protecting the rights of people with impairments, nor were they encouraged to attend ordinary schools.

His parents, on the other hand, were grateful for his diagnosis since it allowed them to properly care for their son. They denied that there was anything wrong with Sumit. His mother even left her profession as an attorney to make sure he was taken care of.

“There were no strong laws for the disabled when I was born, so you can appreciate my mother's determination to fight for my schooling. She visited dozens of schools and spent hours persuading officials that I was cognitively equal to every other youngster. I was admitted into one school. If anyone stared or inquired about her illness, she would carefully explain it to them. My father was also a strong supporter of mine, introducing me to the only pals I had at school: books. My parents are responsible for my knowledge and self-assurance. Sumit believes that a real parental effort can shape wonderful lives. Sumit's mother was the most ecstatic when he landed his first PR job, he says.

Sumit struggled to find work despite his academic achievements and awards. Employers were more concerned about his health, and some didn't even give him the opportunity for an interview or a test. Sumit, not one to be discouraged, chose to establish his own business instead.

“There is still a long way to go until the corporate sector properly knows what inclusion means. I wasn't going to allow their ignorance get the best of me. Throughout my undergraduate and university years, I had developed relationships and networks. Extracurricular activities also allowed me to meet important people, such as Rotary Club members. This was a turning point in my career, and I used my problem-solving skills to impress clients. Sumit says, "I formally started PR Signal in 2017."

“As a kid, I struggled to form relationships with others, but I also attempted to figure out why they behaved the way they did. As a result, I began to contact more people over time, until I realised I could make a career out of it. “I enjoy crafting narratives and images for my clients,” he explains.

Sumit is striving to break down stigmas surrounding disability and promote inclusivity through his company.

“We need to go beyond tokenism and just spreading awareness,” Sumit says when asked how society might be more friendly to the differently-abled. We need a system of checks and balances to ensure that corporations and educational institutions are abiding by the law. Construct infrastructure to assist the disabled in getting around. There is a great deal of untapped potential. We've been sorting out life since we were young, so we're more resilient and patient than you think,” Sumit says.