Future of 20,000 Ukraine returnees hangs by a thread as the Modi government denies help

The students have gone on a hunger strike for the past few days requesting the government to keep up the promises they have made. 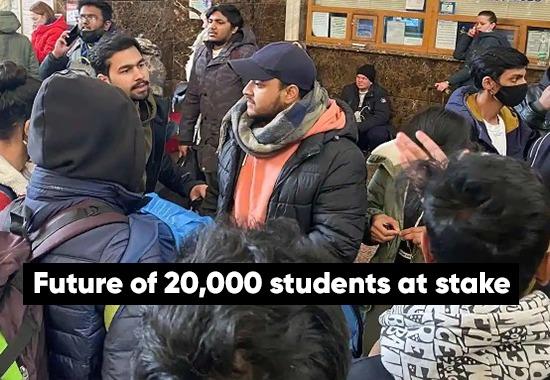 Union Minister for State Health and Family welfare, Bharti Pravin Pawar, informed in the Parliament that there is no provision to accommodate or transfer medical students from any foreign medical institutes to Indian medical colleges.
“There are no such provisions in the Indian Medical Council Act 1956 and the National Medical Commission Act, 2019 to accommodate or transfer medical students from any foreign medical institutes to Indian medical colleges," added the minister.
After the statement, future of around 20,000 students who have returned from Ukraine due to an ongoing war with Russia is at stake. The students have gone on a hunger strike for the past few days requesting the government to keep up the promises they have made.
True Scoop contacted the students who have returned from Ukraine and are now waiting for Government’s help. This is what they have to say:
Jashneen Kaur, a resident of Sudama Vihar, Jalandhar said, “Earlier there was some hope from the government, but now after this statement, I feel helpless. My MBBS for 2 years will go waste if no accommodation is given.”
Father of Pukhraj Singh, a student who has returned from Ukraine added that there is no point in having any expectations in this country as the government will never do anything for the benefit of people residing here.
Kunwar Singh from Shahkot showed his disappointment by saying, “If the government wants to help us then they can surely find a solution to it, but the problem is that they don’t want to provide any aid to us.”
Rushali, a resident of Urban Estate Phase 2 pressed upon the point that the government could have taken an exam and based on the results, they could have accommodated us, but did not do even that. She was very disappointed with the government. Her mother even said that other countries are better than India as they are still ready to provide the students with transfer programs.
Another student Jasmine informed us that all the students are very upset and disappointed with this decision and will be protesting at Jantar-Mantar today against this decision.
Statement of Dr. Sanjay Bedi, Head of Parents Association, Punjab and Member Executive of National Parents Association
“We have filed a case in the Supreme Court in this regard. According to our calculation if only 5 students each who have returned from Ukraine are accommodated in the listed Medical Colleges, then no student’s future will be uncertain. The National Medical Commissioner stated that he does not have the mandate to take decisions in this regard. If the government permits them then they don’t have any problem accommodating the students.”
In the end, he suggested that the government should surely try to find a solution to this problem so that the future of these students is not uncertain.