The question is who copies who? A close look at not just the lyrics, but the way they dress up, behave and conduct themselves in their videos and one is bound to think that modern day Punjabi gangsters and singers are Siamese twins. 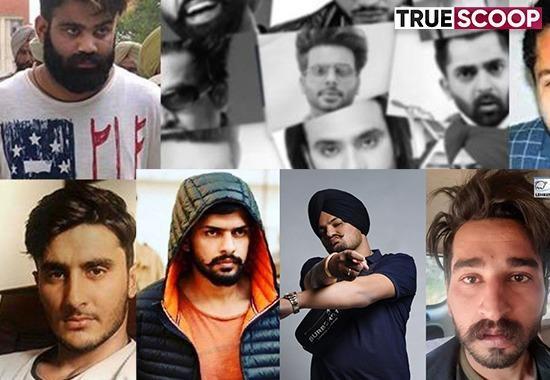 The question is who copies who? A close look at not just the lyrics, but the way they dress up, behave and conduct themselves in their videos and one is bound to think that modern day Punjabi gangsters and singers are Siamese twins. The open televised threats by Lawrence Bishnoi (against Salman Khan), wearing a hoodie played on loop by news channels, and singers talking about picking up AK-47s to take a 'kabza'.... what is fact, and what is fiction.... the lines blur here.In the age of social media, most of the singers' Facebook and Instagram accounts are bound to take one into an alternative reality, understood only by their die-hard fans. For others, it would be tough to distinguish if they are accounts of artists or toughies.But for those living in Punjab, the reality of real life aping the screen one is the real tragedy. You see the singers in their open jeeps, dressed in even louder clothes and jewellery that would put a newly-wed to shame; and those in real life in almost every town here cannot help but conceive themselves to be a part of a song that refuses to end. This is where reel and real intersect, and it is not a great meeting point.In the past decade and a half, gangsters in the state have been known to make extortion calls to singers, ensure that they are not �troubled'. Singers have been routinely �asked' to inaugurate stores and shops -- instructions coming from a gang whose head might be in a high-security prison.In their videos, singers seldom have a problem talking about not following the law, the �effectiveness' of having a gang to get a job done.For the die-hard fan of contemporary Punjabi music, the way of life of those on screen is utopia. Fashion starts and ends with what singers project. By the way, contrary to popular perception, Punjab is an extremely materialistic society -- all one needs to do is a quick search on luxury car sales in the state or ask a few designers in Delhi about the state where there major customer base is.Quite a tragedy for a state which has witnessed some major social movements not just in the past -- the farmers' protest is a recent memory. Major gangsters from the region who have studied in Panjab University in Chandigarh, were regular clubbers at some of the best known night spots, and were openly seen with many celebrities before the law finally caught up with them.While the Police in several districts in Punjab have been forced to station staff outside girls' colleges owing to complaints by college managements about increased eve-teasing by men in open jeeps, Psychiatrist, Dr. Simmi Warraich, who works with Fortis in Mohali feels that multiple factors come into play when it comes to the kind of image that singers project in their work, something which is aped and �normalised' by many people who now become gangsters."It all goes back to the absolutely skewed sex ratio. It may feel distant to us, but the reality of obsession for a male child remains intact. Now when a male child gets that kind of importance, why would it not get him into an alpha male avatar?"Stressing that especially in states like Punjab, Haryana and Rajasthan, the culture, where everything is about them, is bound to make them them narcissistic, she adds, "They then feel the need to be assertive in every area -- big cars, weapons. And sadly, even today, many parents will overlook the behaviour of their male children even if it goes against societal ethos."About repetitive themes of revenge and open glorification of violence in Punjabi content and statements made to the media by gangsters from here, she feels that the rural society has grown up on stories of �an eye for an eye' and therefore find it very �normal'. "When you have forever listened to such tales, they do not seem off-balanced. For you that is what life is, unless you have heard other stories or have been exposed to other narratives. Now, didn't Moosewala openly admire Bhindranwale?" she concludes.
Source IANS